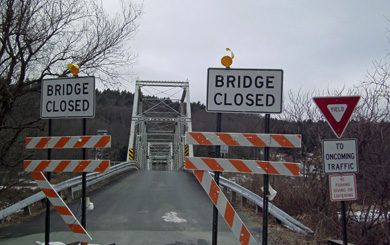 Capital projects and maintenance plans for the 10 Upper Delaware Bridges under the bi-state commission’s purview were discussed at a May 27 WebEx annual meeting chaired by New York State Department of Transportation (NYSDOT) Region 9 Director Nicolas Choubah.

The $200,000 expenditure’s approval “to initiate a planning study for the rehabilitation, replacement, or whatever it will be” for the historic single-lane bridge, as reported by Pennsylvania Department of Transportation (PennDOT) District 4 Bridge Engineer Gerard Babinski, raised alarm by several public meeting participants.

While no specific timetable was offered, an outside consultant will be hired to conduct it.

“I’m upset to hear about this study,” said Wayne County Commissioner Brian Smith. “I hate to see lost time and money on a study when it’s evident that the bridge has outlived its useful life. I think it’s pretty obvious what to do next. That bridge needs to be replaced by a modern structure.”

Smith described the bridge’s importance for the local economy, emergency response, commerce, and the daily convenience of residents.

He said he favors replacing it with a two-lane structure that can carry substantial weight loads, compared to the four-ton limit now on the 467-feet-long, timber deck bridge.

National Park Service (NPS) Upper Delaware Scenic and Recreational River Acting Superintendent Jessica Weinman, however, asked the Commission to be cognizant of the existing bridge’s listing on the National Register of Historic Places since 1988.

“It is one of our outstandingly remarkable cultural resource values,” she said.

Constructed by the American Bridge Company for $14,000 in 1901-02, the Skinners Falls-Milanville Bridge is the oldest multi-span Baltimore truss bridge known to still be in use in the United States. It is also a component of the Milanville Historic District, which joined the National Register in 1993 to recognize that area’s contribution to 19th and early 20th century industrial development.

Shepstone said that while steering committee members expressed different perspectives, one recommendation with universal agreement was to seek a design-build contract. Engaging the same firm to develop and implement the solution to address the bridge’s deteriorating condition would save on the time-consuming solicitation of professional services.

Last fall, PennDOT had estimated a $5.1 million repair cost to reopen the bridge at the 4-ton weight limit. The agency pegged full rehabilitation of the existing bridge to bring it up to a 10-ton posting at $14.1 million. Construction of a new “signature arch” style bridge could cost $13.4 million, while building a new four-span girder beam bridge capable of carrying legal loads was an $8.7 million estimate. They stated that removal of the bridge with no replacement would require a legislative amendment to NY-PA Joint Bridge Commission agreements.

In addition to allocating $200,000 for the Skinners Falls-Milanville Bridge study as an April 1, 2020-March 31, 2021 capital project, the Commissioners approved $4,950,000 to rehabilitate the 1953 Cochecton, NY-Damascus, PA Bridge and $30,000 to do an analysis of re-decking options for the 1939 Port Jervis, NY-Matamoras, PA Bridge, potentially to replace the open grid system which requires frequent welding with a concrete base.

Cochecton-Damascus Bridge construction is set to begin next spring and last for two construction seasons. It includes repairing the deck, railing, sidewalk, and pedestrian fence.

After presenting options to local officials and emergency responders at a March 4 meeting for a full bridge closure with a 22-mile off-site detour and a quicker timetable versus staged construction to maintain traffic in one lane, NYS DOT announced that they will pursue repairing half of the bridge at a time with a traffic signal in place. During winter months, both lanes will be open.

The NYS Department of Environmental Conservation’s Cochecton Fishing Access will be closed to the public for the staging of equipment during the project, but DOT will provide signage for an alternate pathway to the river with temporary parking. The Damascus River Access on the Pennsylvania side will not be affected.

Project Manager Kim Nichols described running into “one snag” by discovering an active eagle’s nest within 200 yards of the bridge. That required applying to the U.S. Fish and Wildlife Service for a Disturbance Permit. Depending on whether mitigation factors affect the schedule, the contract is due to be signed this December with work commencing in 2021.

Annual inspection of all 10 bridges took place on May 4, with illustrated deficiency reports presented of the engineers’ findings.

The Commission also reviewed work completed in 2019 that collectively cost $151,430 and approved $114,200 in maintenance fund contracts for this fiscal year.

Its inspection found heavy spalling on the substructure with exposed and missing reinforcing bars on all piers and abutments. The wearing surface is cracked with various pot holes on the deck and approaches, and the bridge’s paint is at the end of its life cycle.

NYS DOT is currently negotiating with a consultant to handle the design work for rehabilitation of this bridge to include deck replacement, with 2022 targeted to sign a contract.

While Pennsylvania takes lead responsibility for Bridges #1-5 and New York State for Bridges #6-10, they generally share the costs for capital projects and maintenance equally.

Roebling’s Delaware Aqueduct, the 1848 canal bridge linking Minisink Ford, NY and Lackawaxen, PA, has been federally owned by the National Park Service since 1980.

The last order of business at the annual meeting was for Choubah to transfer the chairmanship of the NY-PA Joint Interstate Bridge Commission to PennDOT District 4 Executive Richard Roman for a three-year term.