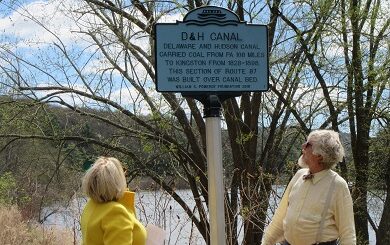 Beach Lake, PA — The Upper Delaware Scenic and Recreational River is pleased to announce that $50,000 in National Park Service (NPS) funds have been secured to update the 1968 National Historic Landmark (NHL) nomination for the Delaware and Hudson Canal.

Bill Merchant, chair of the Delaware and Hudson Transportation Heritage Council (DHTHC), stated, “The D&H Canal was an important transportation network in early America- it provided affordable fuel to New York City, and cheap transportation for resources along its route at the start of the Industrial Revolution, greatly contributing to the development of that city and the United States. Updating its Landmark designation will help bring its stories to a wider audience, assisting the D&H Transportation Heritage Council in fulfilling its mission. All Americans should know all about this important part of our shared heritage.”

Today’s documentation standards are much more specific and descriptive and include geographic information system (GIS) data and photographs.  The NPS will hire a contractor familiar with NHLs or National Register documentation and experience with large cultural landscapes and history of engineering to conduct the project.  Descriptions of the resources currently listed will expanded to be more comprehensive and additional sites may also be included under the update, which will take about three years to complete.

“Through the completion of this project the National Park Service is looking forward to strengthening the relationships between the NPS and the individuals and groups that care for and encourage active stewardship of the Delaware and Hudson Canal,” said Lauren Hauptman, Cultural Resources Program Manager for the Upper Delaware Scenic and Recreational River.

Constructed in 1828 and fully operational until 1898, the Delaware and Hudson Canal Company moved anthracite coal from the Pennsylvania fields near Carbondale by railroad to Honesdale, where it was then loaded onto canal boats and carried to the Hudson River and down to the New York City markets, where it was used as the main source of power and chief fuel during the Industrial Revolution.

A National Survey of Historic Sites and Buildings by the NPS in 1968 identified five areas that were especially noteworthy because they were well preserved and could best illustrate the history of the canal.  Those areas are the 1860 Office of the D&H Canal in Honesdale, Pennsylvania, Roebling’s Delaware Aqueduct between Minisink Ford, New York and Lackawaxen, Pennsylvania, the Neversink Roebling Aqueduct remains and canal basin and bed in Cuddebackville, New York, a 5000-foot section including the Peterskill Aqueduct at Alligerville, New York, and Locks 16-20 including the Roundout Creek Roebling Aqueduct and the DePuy Tavern at High Falls, New York.  The special report resulting from the survey of the Delaware and Hudson Canal was used as the nomination for the property, which was designated a NHL by the Secretary of the Interior in November 1968.

A committee of members from the Delaware and Hudson Transportation Heritage Council (DHTHC), including representatives from the D&H Canal Historical Society (High Falls), the Wayne County Historical Society (Honesdale), the Neversink Valley Museum of History and Innovation (Cuddebackville), the Delaware and Hudson Canal and Gravity Railroad Conservancy, and the Upper Delaware Council, will work with the Upper Delaware Scenic and Recreational River to facilitate the work along with the NPS regional office.

For additional information about the Delaware and Hudson Canal, please visit https://www.nps.gov/upde/learn/historyculture/dhcanal.htm.