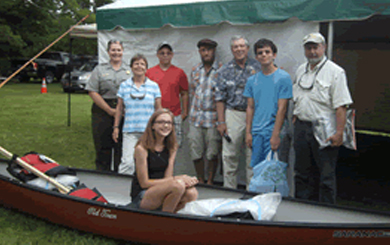 Metzger was the lucky winner of the grand prize drawing from all entries in the derby which honored renowned author, world record fisherman, and Lackawaxen resident Zane Grey as part of the year-long celebration of Pike County, PA’s 200th anniversary.

The bi-state fishing derby opened on April 12 and ran through July 6, targeting rainbow, brook and brown trout, and smallmouth bass caught and released live on the Delaware River, Lackawaxen River, their tributaries, and all the flowing waters of Pike County. Participants photographed their fish on a 24-inch Official Derby Ruler and emailed their entries to the Pike County Historical Society for review by a panel of judges.

In the Open Class Division (Male or Female, ages 16 and up), winners were:

At the conclusion of the awards ceremony, all of the entrants’ names were placed into a random drawing for the grand prize of an Old Town Canoes & Kayaks Saranac 146 canoe with two Carlisle Ausable paddles and two Extrasport Universal personal flotation devices generously donated by Johnson Outdoors Watercraft.

A recap of the Zane Grey Catch-and-Release Fishing Derby will be featured in the August on-line issue of www.thepoconochannel.com.