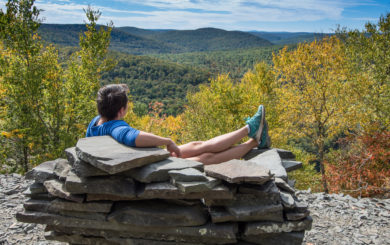 Upper Delaware Visitation Increases by 8% in 2016

Caption: There are many activities for visitors to enjoy in the Upper Delaware region including a brisk hike to enjoy spectacular scenery. (Photo by Eric Rowe)

BEACH LAKE, PA – As the National Park Service embarks on its second century of service, Upper Delaware Scenic and Recreational River is celebrating the significant accomplishments of its centennial celebration and engagement with the Find Your Park / Encuentra Tu Parque initiative.

We are proud to announce that Upper Delaware Scenic and Recreational River recorded 264,362 visits in 2016, which is an 8 percent increase over the 243,246 visitors to the park in 2015. Superintendent Kristina Heister credited the increased visitation to the Find Your Park national marketing campaign and centennial programming at the park. Heister noted that “we owe a great deal of appreciation to our community partners who collaborated in offering an array of programs and recreational opportunities within the river corridor.”

This trend occurred across the country where centennial programs resulted in a significant level of public interest and social media engagement with the National Park Service and the National Park Foundation (NPF). The NPS, NPF, and partners across the nation reached hundreds of millions of people with the centennial’s Find Your Park message, and engaged the public in the NPS stewardship mission.

“Stunning,” Acting National Park Service Director Michael T. Reynolds said of the 331 million visits counted across the National Park System. “We expected more visitors in 2016 as the NPS celebrated its Centennial with special events and activities, but these numbers really show the depth of feeling people have for their national parks, especially considering that increased visitation was recorded not just at the biggest and best known parks but at smaller historical and cultural sites as well.”

Half of national park visitation happened in 26 parks but visitation growth from 2015 to 2016 was also greater in parks that see more modest annual visitation.

Throughout the year, the NPS and its partners will invite the public to explore parks they haven’t yet discovered, build personal connections to special places in their communities, and find ways to help ensure that future generations are able to fully experience their national parks and the NPS programs that steward America’s treasures.

About the National Park Service: More than 20,000 National Park Service employees care for over 400 of America’s national parks and work with communities across the nation to help preserve local history and create close-to-home recreational opportunities. Learn more at https://www.nps.gov