The honor comes as no surprise to those who drive the nearly 70-mile route which links the City of Port Jervis in Orange County to the Village of Hancock in Delaware County, with the majority of miles traversing Sullivan County communities and paralleling the National Park Service Upper Delaware Scenic and Recreational River. 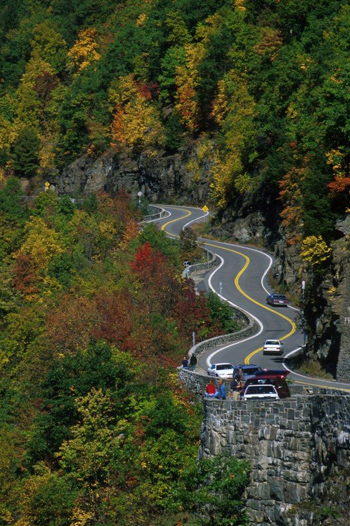 ENGINEERING FEAT: Construction of the Hawk’s Nest portion of New York State Route 97, which evolved from a single-lane dirt road perched 150 feet above the Upper Delaware River and included six “bay window” scenic overlooks in its design, was a significant engineering feat to tackle in the 1930s

“New York State Route 97, originally known as Delaware River Highway Route 3-A, was built as a scenic road to open up the southern tier counties. The Roosevelt New Deal construction project took nine years to complete at a cost of around $4.1 million. At its grand opening ceremony held on August 30, 1939, it was officially dedicated as ‘The Most Scenic Highway in the East’,” said Nadia Rajsz, chairperson of the volunteer committee which oversees administration of the UDSB Enhancement Concept Plan.

It is an area characterized by stunning scenery, a rich history, communities both lively and quaint, and an abundance of recreational opportunities.

The experts extolled its “breathtaking vistas and hiking trails, panoramic views, side roads to explore, fishing banks and the Elks Brox Memorial Park. On the way, visitors can stop in small towns and check out shops, museums and art galleries, and choose from local restaurants to grab a bite to eat. The Upper Delaware Scenic Byway is popular among motorcyclists and road bikers, as well as visitors in cars wanting a glimpse at the changing of seasons.”

The Upper Delaware Scenic Byway came in just behind Michigan’s M-22 and ahead of the Kancamagus Scenic Byway in New Hampshire on the top 10 voting list.

For information on the Upper Delaware Scenic Byway, Inc. or to request a brochure, please visit www.upperdelawarescenicbyway.org or call toll-free (866) 511-UDSB (8372).