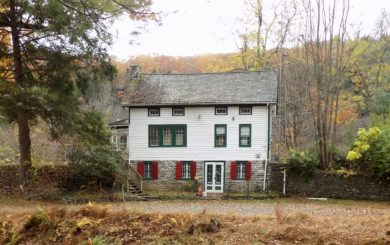 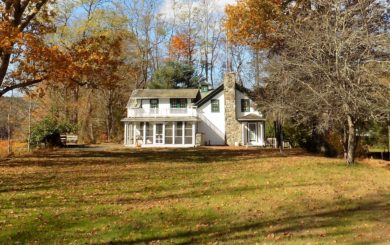 POND EDDY – “What’s in a name?” asked William Shakespeare. “That which we call a rose by any other name would smell as sweet.”

After research uncovered historical inaccuracies, the Upper Delaware Scenic and Recreational River’s canal era property in the Town of Lumberland, NY known throughout the National Park Service’s quarter-century of ownership as Corwin Farm will now be named Cowen Farm.

A decision was finalized in December 2019 to correct the name based upon newly discovered documentation that it was Joseph Cowen who constructed the farmhouse on the property around 1838.

The Cowen family remained associated with the property through the existence of the Delaware and Hudson Canal, which ceased operations in 1898. A closer inspection of 1865 D&H Canal survey maps revealed the name “J. Cowin”. Due to Corwin having been a common name in the area during that time period, the misspelling was assumed to have been Corwin instead of Cowen.

The name Joseph Cowen, first realized during a chain of title search for the property, was confirmed through census records and is referenced in John Willard Johnston’s 1901 book, Reminiscences.

Further analysis of the 1865 survey maps that were obtained by the D&H Transportation Heritage Council primarily through the dedicated efforts of member Kerron Barnes revealed a second misinterpretation. The belief that the farmhouse belonged to a lock tender was found to have been an error. On the D&H Company maps, it can be easily seen that the lock tender’s house was actually on the north side of the property line, near the lock that was filled in many years ago, and not on the National Park Service property.

Instead, the lower level of the farm house was used as a small store front that opened up to the canal towpath to sell goods to those traveling on the canal.  The terrace on which the Cowen Farmhouse sits was created by the construction of the Delaware and Hudson Canal which left behind raised levels of easy-to-plow soil to plant crops and gardens.  The 1850 Agricultural Census shows that Cowen grew potatoes, buckwheat, and hay, and produced 150 pounds of butter, which were likely sold on the regional market.  Johnston describes the farmstead in Reminiscences:

“The little farm, cleared and regulated by Joseph Cowen in his active years, is maintained in its former productive condition and made to yield the principal vegetable for family consumption; a small surplus for market, and the requisite keeping of a single horse and 2 or 3 cows. Small fruits such as strawberries, raspberries, blackberries of the choicest selection, and early vegetables of first quality are raised from the garden lands and sold to the public in considerable quantities. A profitable number of fowls, of carefully chosen stock is also maintained; and by a rare exhibition of judgement, skill and attention, the farm and garden lands are sources from which an ample supply for the household is derived, or nearly so; and thus showing how conspicuously a small area of land under approved management, will reward the hands of industry and care.”

Joseph and his wife, Phoebe, lived on the property until their deaths in 1864 and 1890 respectively.  Before their deaths, the property had already been passed down to their daughter Caroline, who married Albert Stage, a lumberman merchant, teacher, and member of the Sullivan County Board of Supervisors.  The Stages continued to live in the farmhouse and retained use and management of the farmstead until Caroline passed in 1914 just before Albert died in 1915.  The property was owned by several other families prior to the National Park Service purchased the land in 1995, most significantly the Strenz family from the 1920s through the 1960s.

To learn more about Cowen Farm, Joseph and Phoebe Cowen, and Caroline and Albert Stage, keep an eye out this spring on the Upper Delaware Scenic and Recreational River website, www.nps.gov/upde, for new pages that tell the story of Cowen Farm.

There will also be an opportunity for the public to stop by the property located at 2995 State Route 97, Pond Eddy, NY 12770 and speak with a ranger about its history and current use during the Sullivan County Sneak Peek event on May 16th and 17th between 10:00 a.m. and 4:00 p.m.

As more details about the Sneak Peek weekend develop, they will be announced on Facebook (https://www.facebook.com/updeNPS) and Instagram (https://instagram.com/UpperDelawareNPS).