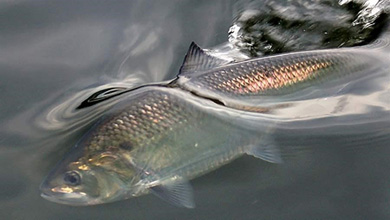 An ancient and impressive wildlife migration is occurring in our midst. The spring spawning run of American shad in the Delaware River is a timeless rite of spring that has taken place here for the past 10,000 years. Determined fish are now travelling 330 miles or more upriver from the ocean, on this last major river on the Atlantic Coast undammed the entire length of its main stem. Some of these 3 to 6-year-old fish have travelled over 12,000-miles at sea during their ocean odyssey, wintering off the Carolinas and venturing north on annual summer feeding forays to the Gulf of Maine and the Bay of Fundy. Most are now completing what will be their final journey.

Historically, the Delaware River had the largest American shad runs of any river on the Atlantic Coast, with migrating fish likely numbering in the tens of millions. Here is one local resident’s account:

“I’ve looked in that river when the shad used to run full force. You’d stand on the bridge and look down and you could not see the water for the shad. It was just one solid mass of fish, and very dark. You wouldn’t even know this was water. We don’t get runs like that anymore…” (Russell “Doc” Homer, Lordville, NY, 1920-2001, National Park Service Interview, December 3, 1987).

While much reduced in numbers today, American shad runs on the Delaware are still significant, and remain an important food source for numerous species of wildlife, including bald eagles, during a time of greatest provisioning needs for their growing young.

Millions of broadcast shad eggs are consumed by fish and other aquatic life during this time of plenty after a spare winter. Ocean-derived nutrients embodied in these fish are like a giant vitamin pill for the system. Decomposing shad provide nutrients that enhance the growth of aquatic vegetation, which in turn is fed upon by macro-invertebrates and other biota. Millions of young shad also provide an abundant food source for everything that preys upon small forage fish in the Delaware River during the summer months. And come fall, out-migrating young-of-year shad in turn feed ocean fisheries, balancing an age-old cycle and completing an important riverine-marine ecological link that benefits both realms.

The conservation organization American Rivers recently designated the Delaware their 2020 River of the Year (https://www.americanrivers.org/2020/04/river-of-the-year-for-2020-the-delaware-river/ ), recognizing its resurgent health, the importance of clean water and a healthy river to the regional economy, and the shared stewardship approach to caring for it.

As a unit of the National Wild and Scenic Rivers System since 1978, Upper Delaware Scenic and Recreational River realizes some important protections afforded under the Wild and Scenic Rivers Act. These include a prohibition on river obstructions such as dams, helping to ensure that sea-run migratory fish species such as American shad and American eel continue to have unimpeded access to historic spawning and rearing habitats throughout the river – access that is now missing from so many of the nation’s other rivers.

The American shad run draws thousands of fishermen annually along the length of the Delaware River in pursuit of these hard-fighting fish. Upstream migrating shad are also often visible off some of our area’s bridges. Bridges suitable for viewing, with pedestrian walkways and shallower water beneath, include the Pond Eddy Bridge, the Barryville/Shohola Bridge, the Roebling Bridge, the Damascus/Cochecton Bridge, the Callicoon Bridge, and the Route 97 Bridge over the East Branch of the Delaware River. Look for 16-24” greyish-backed fish, lighter-colored than the river background, swimming upstream in small groups.

To learn more about the importance of open rivers and migratory fish, watch the World Fish Migration Foundation’s video at the link below:
https://www.youtube.com/watch?v=7tBtz2uv8fI

Upper Delaware Scenic and Recreational River had hoped to celebrate World Fish Migration Day 2020 on May 16th, but that event has been postponed until October. Stay tuned for future notifications of this event.