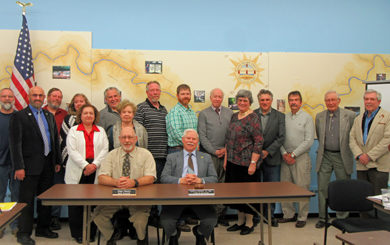 NARROWSBURG – The Upper Delaware Council, Inc. (UDC) has confirmed its delegates for 2019 to oversee the non-profit organization’s coordination of the federal-state-local partnership dedicated to conserving the Upper Delaware Scenic and Recreational River.

Council members with voting rights are the eight New York towns and five of the seven Pennsylvania townships that border on the Upper Delaware River, as well as the State of New York and the Commonwealth of Pennsylvania.

The Delaware River Basin Commission participates as a non-voting member. The U.S. Department of the Interior/National Park Service is the UDC’s non-voting federal partner.

Members appoint representatives and alternates to serve on the UDC board. Following municipal reorganizational meetings, the 2019 roster is:

The river corridor extends 73.4 miles from the confluence of the East and West Branches of the Delaware River below Hancock to Railroad Bridge No. 2 at Sparrowbush. It encompasses 55,574.5 acres that remain in majority private ownership within portions of Delaware, Sullivan, and Orange Counties in NY; and Wayne and Pike Counties in PA.