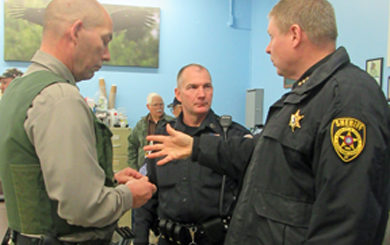 NARROWSBURG – While federal funding is available to assist with recreation-related law enforcement within the boundaries of the National Park Service (NPS) Upper Delaware (UPDE) Scenic and Recreational River corridor, its administration can be challenging.

The Upper Delaware Council, Inc. (UDC) hosted a meeting on Dec. 4 at its Narrowsburg office to bring the NPS and communities together to discuss the history and current status of this funding program, develop recommendations for potential changes, and have open dialogue.

The UDC had conducted a survey of its member municipalities on the topic of law enforcement in the river corridor starting in August 2018. This followed a May 25 letter to NPS requesting information on the law enforcement contracts program, the issuance of a comprehensive report on June 14 compiled by UPDE Superintendent Kristina Heister, and the analysis of survey results returned by early October from nine out of 13 UDC member towns and townships.

The federal government currently owns just 30.74 acres out of the 55,574.5 acres within five counties of NY and PA that the U.S. Congress designated as a unit of the National Wild and Scenic Rivers System in 1978. The vast majority of the land is therefore privately owned.

John Hutzky, who served as the inaugural UPDE superintendent from 1979 through 1995, was quoted as saying about the law enforcement funding contracts, “The impetus behind this was the public demand that something be done to curb the vandalism, rowdy-ism and other unsavory activities of the yearly influx of canoeists between Memorial and Labor Days.”

The first NPS funding to support local law enforcement departments came in 1980, during a year in which there were 10 drownings on the Upper Delaware River.

As of 2018, only one contract remains active with the Town of Deerpark Police Department for $3,221 focusing on patrols of the New York State Route 97 Hawk’s Nest.

NPS also previously offered funding assistance of approximately $1,500 each or less to dive teams, fire departments, and rescue squads operating in the river valley. This program ceased in 2011 based on a federal contracting decision that these payments could not be provided for volunteer services.

Meeting participants discussed shifts in how the funding has been disbursed over the years, the impacts of changes in federal contracting policies and regulations, new Statements of Work that prioritized awarding funds based on the overall level of visitor use and past river-related incidents in a community, and the application of the Service Contract Act in 2016 which requires a payment of $36.78/hour (salary and fringe benefits) as established by the U.S. Department of Labor for river patrols. That cost would be borne by NPS during the summer recreational season based on each police agency’s proposal and documentation.

The correlations between visitor contacts, total number of patrol hours, and the NPS funding were traced, as well as reviewing the types of incidents reported statistically.

There was also discussion about what the funding could cover such as labor, training, ammunition, and some equipment, and what it cannot, including vehicle purchases, protective vests, speed enforcement devices, or communications equipment, as well as anything occurring outside the corridor.

Participants put forth a number of ideas that the UDC will pursue to offer recommendations to NPS.

These included encouraging citizens to lobby Congress for an increase in funding for this program, petitioning the U.S. Department of Labor to establish a classification for Constables in order to set an appropriate wage rate, convening meetings specific to each community interested in participating to tailor a program to their needs, exploring the payment schedule of purchase orders, and considering use of the $58,000 to hire two seasonal park rangers in 2019 to augment the six-member UPDE Protection Division and provide additional back-up for local departments.

The UDC was incorporated as a non-profit organization in 1988. Voting members are the 8 New York State towns and 5 out of the 7 Pennsylvania townships that border along the Upper Delaware River, as well as the State of New York and the Commonwealth of Pennsylvania. The Delaware River Basin Commission is a non-voting member of the board. The UDC operates under the terms of a Cooperative Agreement with its federal partner at the U.S. Department of the Interior/NPS to implement the Upper Delaware River Management Plan.