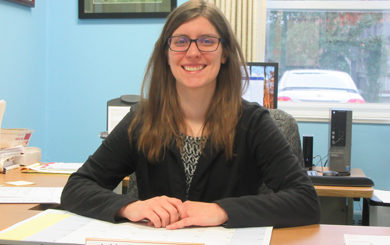 The position had been vacant since August 17.

Prior to joining the UDC, Hall-Bagdonas was employed since June 2014 as a legal secretary for the Bugaj/Fischer, P.C. law firm in Honesdale, PA.

Hall-Bagdonas is a 2004 graduate of Western Wayne High School and earned an Associate’s degree in Human Services from Lackawanna College in Scranton in 2006. She studied social work at Millersville University for two years.

Born in Groton, CT, Hall-Bagdonas was raised by her U.S. Navy veteran father Gerald Bagdonas, Jr. and grandmother Margaret in their hometown of Waymart, PA since Kindergarten age.

She developed a deep appreciation for water bodies after spending summers and vacations on Lake Alden in Wayne County, then went on her first-ever kayaking trip on the Delaware River during her college years.

“I have a passion for the Delaware River, specifically recreating on it, and I wanted to be able to give back in a larger sense to serve its habitats and communities. The uniqueness of the Upper Delaware Council in working with the river communities and different levels of government interested me,” Hall-Bagdonas says.

She served as newsletter editor for Northeast Pennsylvania Audubon Society from 2014 until recently, was Communications co-chair since 2016, and continues to assist with the publication of its Eco-Notes and organization of the annual Art and Craft Festival in July, which is the non-profit organization’s primary fundraiser for awarding camp and college scholarships.

In 2014, Bagdonas married Sarah Hall after they met in college. The couple resides with their rescue pitbull mix dog Cindy Lou Who and Maine coon cat Zorro on a historic farm property in Lake Ariel, where they help tend the garden and raise free-range chickens.

Sarah Hall-Bagdonas is the program manager for the Northern Tier Hardwood Association after previously working for the Wayne Conservation District as the Forest Specialist.

In her free time, Hall-Bagdonas enjoys spending time with family, indie rock music, exploring new segments of the Upper Delaware River to kayak and tube, and has recently taken an interest in fly-fishing.

For more information on the UDC and its activities, please stop by the office at 211 Bridge St. in Narrowsburg or visit www.upperdelawarecouncil.org.