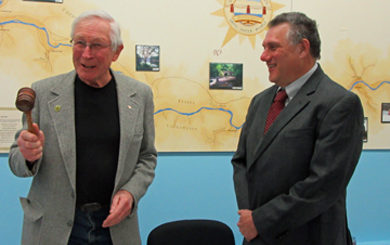 NARROWSBURG – Having entered its 30th anniversary year with no income to meet ongoing expenses, the Upper Delaware Council, Inc. (UDC) weathered a nearly five-month funding drought before finding out on Feb. 8 that access to its federal appropriation is restored.

The U.S. Department of the Interior (DOI) had withheld the reimbursement payments that the UDC applies for monthly to fulfill its responsibilities outlined in a Cooperative Agreement with the National Park Service (NPS) while the agency reviewed all federal grants valued at $50,000 or more.

No timetable or updates were offered for completion of those nation-wide reviews.

Since federal Fiscal Year 2018 began on October 1, 2017, the UDC was forced to draw down from its modest working capital account to remain operational.

The Council took action at its Feb. 1 board meeting to set a March 30, 2018 closure date with staff layoffs if the $300,000 annual federal funding stream remained inaccessible.

“I am elated to learn that our 2018 funding has been reinstated. Although the suspension of funding inflicted many setbacks to our operation and staff, the UDC will do its best to overcome these obstacles and move forward with our work plan for 2018. We will now be able to use its financial resources once again toward productive purposes,” he said.

“I extend my wholehearted thanks to those in the public sector, private individuals, other concerned organizations, the media, and especially Congressman John Faso (NY-19) for advocating for us during this ‘do or die’ period,” Robinson said.

Sounding a note of caution after Fiscal Year 2017 funding had been similarly delayed by an unexpected DOI review that lasted from April to July, the UDC chairperson added, “I only hope this is the very last ‘near death experience’ that the Council will endure.”

The 501(c)(3) corporation was established in 1988 to ensure the effective implementation of the Final 1986 River Management Plan (RMP) for the 1978 Congressionally-designated Upper Delaware Scenic and Recreational River and oversee its administration on a continuing basis, utilizing the existing authorities of its members.

Voting members are the two states – New York and Pennsylvania – and 13 local governments (8 NY towns and 5 PA townships) that border along the Upper Delaware River. The Delaware River Basin Commission is a non-voting member, while the National Park Service is the UDC’s federal partner.

Each member appoints a representative and alternate(s) to serve on the Council. The board sets policies and approves actions. The UDC employs a full-time staff of three (formerly four preceding budget cutbacks, which included a Public Relations/Fundraising Specialist) in the positions of an Executive Director, Resource Specialist, and Secretary.

At the Feb. 1 meeting, the Council regretfully accepted the Feb. 16 resignation of Cindy Odell of Honesdale, PA who began employment as UDC Secretary on Aug. 29, 2011. The position is currently being advertised.

The source of the UDC’s federal funding for its current Cooperative Agreement period covering Oct. 1, 2015 through Sept. 30, 2020 is a line-item appropriation within the budget of the NPS Upper Delaware Scenic and Recreational River, contingent upon the approval of funds by Congress and authorization of their release by the DOI.

The RMP proposed a 60% federal/40% States cost-sharing ratio for the Council’s operation; however, neither state has contributed directly in response to the UDC’s requests. The $300,000 federal appropriation from 1988 has remained flat.