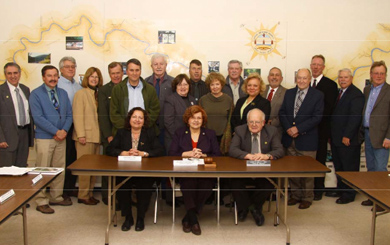 NARROWSBURG – Damascus Township, PA Representative Dolores A. Keesler was elected as the 2011 chairperson of the Upper Delaware Council, Inc. during the UDC’s annual meeting held January 6 in Narrowsburg.

Also sworn in were Vice-Chairperson Nadia Rajsz of the Town of Lumberland, NY, and Secretary-Treasurer John B. Niflot of the Town of Fremont, NY. A reception with cake and coffee followed the monthly business meeting.

Dolores Keesler has been a member of the UDC board since Aug. 18, 2008. Damascus Township appointed Keesler as its first-ever representative after officially join ing the organization on July 21, 2008. She served as UDC vice-chairperson last year.

Keesler obtained a Bachelor of Arts degree in Education from Paterson State College in Wayne, NJ in 1961 and exceeded Master’s Degree in Education credit requirements in Pennsylvania. She worked as an elementary school teacher for 28 years in Jeffersonville, NY; and in Damascus, Lincoln, Stourbridge, and Lakeside Elementary Schools in PA.

Keesler was an early activist in Delaware River valley issues, interested in preservation and conservation issues.

She is currently a Mary Kay beauty consultant, the Matron of the St. Tammany Order of the Eastern Star in Callicoon and treasurer of the Royal Garnettes (Red Hatters). Keesler also belongs to several United Methodist Church associations and the Storm King Power Squadron boating organization on the Hudson River.

Her interests include traveling and cruising, Japanese ornamental gardening, and alternative healing practices. Keesler and her husband Jimmy, deceased in 1987, are parents to Kirk, Kory, and Kristal, and have six grandchildren and two great-grandchildren.

Nadia Rajsz was elected as 2011 UDC vice-chairperson. Rajsz previously served on the UDC board from 2000-2007, including terms as vice-chair in 2003 and chairperson in 2004. She resumed her role as Lumberland’s UDC representative in January 2010, coinciding with her election as Town Supervisor after eight years of experience as a councilwoman.

She serves on the faculty of Orange County Community College in the field of medical technology and is on the laboratory staff at Orange Regional Medical Center’s Arden Hill Campus in Middletown, NY.

In addition to many town-associated duties, Rajsz currently chairs the Upper Delaware Scenic Byway, Inc. for enhancement of the state-designated Route 97 highway corridor and is president of the Ukrainian National Women’s League in Glen Spey.

Niflot has served as a councilman on the Fremont Town Board since 1994. The Mileses resident is also a founder and the current president of the Basket Historical Society of the Upper Delaware Valley, which operates a seasonal museum in Long Eddy.

The Upper Delaware Council is a not-for-profit corporation which was established in 1988 under a Cooperative Agreement partnership with the National Park Service to oversee the coordinated implementation of the River Management Plan for the Upper Delaware Scenic and Recreational River, a component since 1978 of the National Wild and Scenic Rivers System. Council members are eight NY towns (Hancock, Fremont, Delaware, Cochecton, Tusten, Highland, Lumberland, and Deerpark) and five PA townships (Berlin, Damascus, Lackawaxen, Shohola, and Westfall) that border on the Upper Delaware River, as well as the State of New York and the Commonwealth of Pennsylvania. The Wayne County, PA townships of Buckingham and Manchester remain eligible to join to complete the full roster of local municipalities. The Delaware River Basin Commission is a non-voting member.

The National Park Service Upper Delaware Scenic and Recreational River is a partner.

For more information on the UDC and its activities, please visit the UDC website at www.upperdelawarecouncil.org or call (845) 252-3022.

Elected as 2011 officers were, seated from the left: Vice-Chairperson Nadia Rajsz, Town of Lumberland; Chairperson Dolores A. Keesler, Damascus Township; and Secretary-Treasurer John B. Niflot, Town of Fremont.