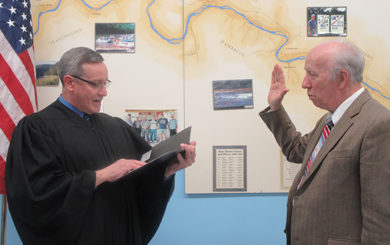 NARROWSBURG – Town of Cochecton Representative Larry H. Richardson took his oath of office to serve as 2020 chairperson at the Feb. 6 meeting of the Upper Delaware Council, Inc. (UDC).

The Honorable Steven Sauer, Town Justice for the Town of Cochecton, officiated at the swearing-in ceremony held at the UDC’s Narrowsburg office. 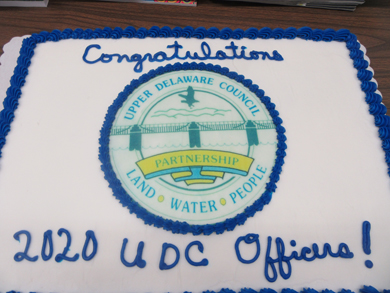 This is Larry Richardson’s fourth stint as UDC chairperson, having previously served in 1993, 2001, and from May 5-Dec. 31, 2011. He succeedsTown of Delaware Representative Harold G. Roeder, Jr. in the leadership position.

The Town of Cochecton appointed Richardson to serve as its UDC representative in 1989, one year after the Council’s establishment.
Raised in Ferndale, NY, Richardson graduated from Liberty High School in 1965 and Sullivan County Community College in 1968.

In 1991 he began employment with the Yaun Company, a plumbing, heating and electrical distributorship with headquarters in Liberty for which he served as Vice-President of Sales and Service for many years, and is now semi-retired.

Richardson has a long history of public service beyond his UDC participation, which also includes chairing the Operations Committee this year and continuing as a member of the Project Review Committee and Personnel Subcommittee.

He served on the Town of Cochecton Planning Board from 1989-1996, before winning election to the Town Board. He logged 19 years as a Town Councilman through 2015.

Richardson is a founding member of the Cochecton Preservation Society and has served as the group’s treasurer since 1992.

Since its 2002 incorporation, Richardson has represented the Town of Cochecton on the Upper Delaware Scenic Byway, Inc. Committee and has acted as its treasurer for many years.

Married for 51 years, Peggy and Larry are the parents of Russell Richardson, who resides with his wife Jennifer and four children in Binghamton; and Erin Shirling, who lives in Yorktown Heights, NY with her husband Lewis.

Dexter, who was instrumental in Damascus Township’s July 21, 2008 decision to join the Council, was appointed as 1st alternate in January 2010 before assuming the UDC representative position in 2012.

He is a member of the UDC’s Project Review and Operations Committees, and the Personnel Subcommittee.

Dexter retired from the Damascus Board of Supervisors in 2015 following a 10-year tenure, including six years as chairman. He was appointed to a six-year term as Township Auditor effective Jan. 4, 2016.

He is the Volunteers-in-Mission Team Leader for disaster recovery projects through the Damascus Methodist Church, the sponsor’s representative to the Northeast Council of the Boy Scouts of America for Troop 122 in Damascus, is active with the Damascus Volunteer Ambulance Corps, and belongs to numerous local historical societies.

Jeff and his wife, Linda, built their log home in Damascus. They have three children: Kari, Bethany, and Jonathan.

Al Henry was appointed by the Berlin Township Board of Supervisors as its UDC delegate on Jan. 3, 2012.

He chaired the Council in 2015 after having served as its secretary-treasurer from Aug. 1-Dec. 31, 2013, then again in 2014, and the past four years of 2016-19. He sits on all three UDC committees (Water Use/Resource Management, Project Review, and Operations) and chairs its Personnel Subcommittee.

Henry helps maintain his family’s 300-acre Village View Farm property in Beach Lake, and is a member of the Beach Lake Hunting and Fishing Club.
Al and his wife, Karen Carlson, are the parents of Alana and Dylan. They are grandparents to Beau and Penn, the sons of Dr. Alana and Bart Rickard.

The Upper Delaware Council works in partnership with the National Park Service to oversee implementation of the River Management Plan for the Upper Delaware Scenic and Recreational River. Visit www.upperdelawarecouncil.org for more information.