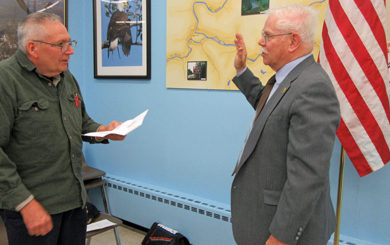 At right: Town of Delaware Deputy Supervisor Alfred Steppich, left, congratulates Harold G. Roeder, Jr. after swearing him in as 2019 chairperson of the Upper Delaware Council on Feb. 7th.

NARROWSBURG – Town of Delaware Representative Harold G. Roeder, Jr. took his oath of office to serve as 2019 chairperson at the Feb. 7 meeting of the Upper Delaware Council, Inc. (UDC).

Alfred Steppich, deputy supervisor for the Delaware Town Board, officiated at the swearing-in ceremony held at the UDC’s Narrowsburg office.

Chairperson
This is Harold Roeder’s third stint as UDC chairperson, having previously filled that role in 2000 and 2010, and serving as vice-chair in 2009. He succeeds 2018 Chairperson Aaron I. Robinson of Shohola Township.

Roeder is now in his 22nd year on the Council after the Town of Delaware appointed him as its UDC voting delegate in 1997.

The 78-year-old moved to the Town of Delaware from Queens at the age of 12 in 1952, graduated from Delaware Valley High School, and earned Bachelor’s and Master’s degrees in Music Performance from Ithaca College.

Past employment included working as a music teacher at Roscoe Central School and music instructor at Ithaca College, and as proprietor from 1960-86 of Roeder’s Pianos and Organs which sold, tuned and repaired those instruments as the largest distributorship in the Hudson Valley. In 1988, he earned his real estate license and from 1992 until his 2015 retirement, he operated Roeder’s Appraisal Service as a certified general real estate appraiser. His son, Brian, has taken over that business.

Roeder was appointed Town of Delaware Councilman to fill a vacancy on the board in March of 2009 and won subsequent elections through his resignation in January of 2015 when Roeder and his wife, Donna, moved from Hortonville across the river to Welcome Lake, PA. Appointments to the bi-state UDC organization are made at the prerogative of the member municipality without residency requirements.

Roeder has been a long-standing member of the UDC’s Project Review and Operations Committees, as well as the Government Officials Liaison Subcommittee.

The classically-trained Roeder enjoys “serious music” and “dabbles” in musical composition. He is a sportsman who enjoys angling for trout in the Callicoon Creek, shooting sporting clays, and belongs to the Pleasant Valley Hunting Club.

The Roeders are the parents of Hal, Katrina, and Brian. They have nine grandchildren and three great-grandchildren.

Vice-Chairperson
Jeff Dexter will serve as the Council’s vice-chair in 2018.

Dexter, who was instrumental in Damascus Township’s July 21, 2008 decision to join the UDC, was appointed as first alternate representative in January 2010 before assuming the UDC representative position in 2012.

He served as the Council’s vice-chair in 2012, was elected as chairperson in 2013, became secretary-treasurer in 2015, and was vice-chair again in 2016. He is a member of the UDC’s Project Review and Operations Committees, and the Personnel Subcommittee.

Dexter retired from the Damascus Board of Supervisors in 2015 following a 10-year tenure, including six years as chairman. He was appointed to a six-year term as Township Auditor effective Jan. 4, 2016.

He is the Volunteers-in-Mission Team Leader for disaster recovery projects through the Damascus Methodist Church, the sponsor’s representative to the Northeast Council of the Boy Scouts of America for Troop 122 in Damascus, is active with the Damascus Volunteer Ambulance Corps, and belongs to numerous local historical societies.

Jeff and his wife, Linda, built their log home in Damascus. They have three children: Kari, Bethany, and Jonathan.

Secretary-Treasurer
Al Henry was appointed by the Berlin Township Board of Supervisors as its UDC delegate on Jan. 3, 2012.

He chaired the Council in 2015 after having served as its secretary-treasurer from Aug. 1-Dec. 31, 2013, then again in 2014, and the past three years of 2016-18. He sits on all three UDC standing committees (Water Use/Resource Management, Project Review, and Operations) and chairs its Personnel Subcommittee.

Al and his wife, Karen Carlson, are the parents of Alana and Dylan. They are grandparents to Beau, the son of Dr. Alana and Bart Rickard.