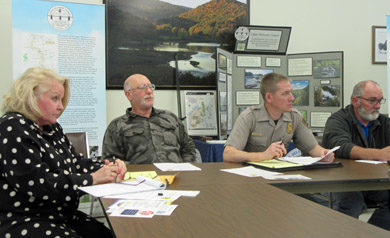 Twenty people attended the October 29 meeting in Narrowsburg to discuss how to streamline communications for any emergencies involving the railroad which runs 123 miles between Binghamton and Port Jervis in New York and Pennsylvania.

In 1997, former railroad operator Conrail had worked with the Delaware Riverkeeper Network in collaboration with the UDC and National Park Service over a two-year period to publish an Emergency Response Guide for the Upper Delaware River Valley covering the territory from Port Jervis to Deposit, NY.

Five hundred copies were distributed to emergency responders in five counties, with a series of orientation sessions held in Hancock, Narrowsburg, and Shohola, followed by a live locomotive safety demonstration arranged in Sparrowbush in 1998.

The August 9, 2018 derailment of 15 cars of a NYSW freight train on a flood-eroded section of tracks near Hale Eddy in the Town of Deposit, which resulted in spilling approximately 4,000 gallons of diesel fuel into the West Branch of the Delaware River, prompted the UDC to renew its long-term efforts to update the guide based on communication challenges experienced in that incident.

The UDC has started a contact list of agencies to partner on this project. Funding sources and appropriate formats using current technology are being explored.

CNYK – which has a 24-hour toll-free line at (800) 366-6979, ext. 8 to report any railroad issues or track obstructions – also offered to facilitate educational outreach through the Operation Lifesaver non-profit organization.

Programs are targeted to promote public safety at highway-rail grade crossings and along the private railroad rights-of-way through presentations and materials for such audiences as school children, community organizations, driver education classes, and professional truck and bus drivers. They also offer in-person and on-line training classes for law enforcement officers and emergency responders.

For more information on this initiative, please contact UDC Executive Director Laurie Ramie at (845) 252-3022 or laurie@upperdelawarecouncil.org.