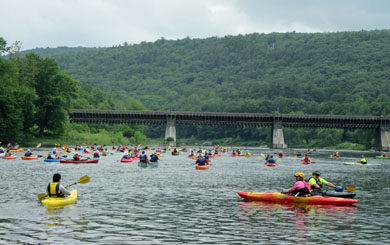 The Upper Delaware Council approved sending the following letter to the Governors and Mayor of the four Delaware River Basin states and New York City on September 7, 2017 regarding the pending suspension of voluntary additional water releases from the Delaware System Reservoirs:

The Upper Delaware Council, Inc. (UDC) urges the Decree Parties to take immediate action to finalize an agreement to manage flows from the Delaware River Basin Reservoirs and avoid the devastating impacts on our ecosystem and economy that a reversion to the 1983 operating plan would wreak on the Upper Delaware River Valley.

We are genuinely appreciative that the New York City Department of Environmental Protection (NYC DEP) initiated voluntary releases of additional water three months ago after the Flexible Flow Management Program expired on May 31, 2017 due to failure to reach unanimous consent on its renewal. Their decision essentially saved the river from harm during the summer season.

With NYC DEP’s recent announcement that it will begin ramping down releases starting Sept. 5 ahead of implementing on Oct. 10 the extremely low 1983 “Revision 1” release rates, there is a renewed urgency for the Decree Parties to focus on working out a longer-term solution.

As leaders of the four Delaware River Basin states and New York City, you are responsible for setting the tone in prioritizing the protection of the river system over hardball negotiating tactics that threaten to harm our vital ecology and tourism-based economy, including a world-class trout fishery and the Upper Delaware Scenic and Recreational River unit of the National Parks System.

Releases from the Cannonsville Reservoir would decrease from 500 cubic feet per second (cfs) as recorded on Aug. 20, to 275 cfs on Sept. 5th, 45 cfs on Oct. 10th, and 33 cfs on Nov. 1st. In flood situations, there are no spill mitigation provisions under Revision 1 to help safeguard downstream people and property.

On behalf of our non-profit organization’s membership of eight New York towns, five Pennsylvania townships, the State of New York, Commonwealth of Pennsylvania, and the Delaware River Basin Commission, working in partnership with the National Park Service, we implore the Decree Parties to break through the impasse in light of the serious and dire consequences that await otherwise.