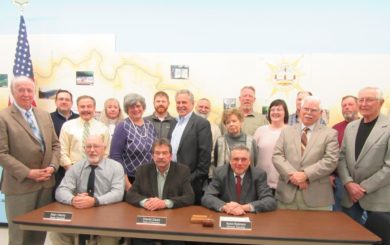 NARROWSBURG – The Upper Delaware Council, Inc. (UDC) will shut its doors on March 30 if the non-profit organization remains unable to access the federal funds it relies on to operate after 30 years of Cooperative Agreements with the National Park Service (NPS).

Since the new fiscal year began on October 1, the UDC has had no income due to an ongoing review by the U.S. Department of the Interior (DOI) of all federal grants and Cooperative Agreements over a $50,000 value.

No timetable has been offered for completion of that review, and the UDC’s unrestricted fund account that it uses to advance payment of its federal task expenses while awaiting monthly reimbursement from the federal government is quickly dwindling.

Therefore, the Council will implement a closure plan with staff layoffs on March 30 unless or until the DOI authorizes the NPS Northeast Regional Office to release any portion of the $300,000 Congressional appropriation for the UDC that the NPS Upper Delaware Scenic and Recreational River has available in its FY 2018 budget.

This latest financial hardship comes after the UDC experienced a three-month lag in funding six months into Fiscal Year 2017 when Secretary of the Interior Ryan Zinke ordered a similar review of all Cooperative Agreements over a $100,000 award ceiling, until the Council’s balance of funding through Sept. 30 was restored in July.

If the UDC closes its Narrowsburg, NY office, all non-essential programs and services will be suspended and three full-time positions of Executive Director, Resource Specialist, and Secretary will be subject to layoff.

Among the activities in jeopardy are:

• reviews of land use projects and zoning ordinances that the UDC conducts for its 13 member municipalities to assure substantial conformance with the Upper Delaware Land and Water Use Guidelines, a task which would then fall directly to the National Park Service;

• technical assistance guidance and grants that the UDC provides, through which $845,605 was awarded from 1988-2017 to fund 247 river valley projects; and

The UDC was established in 1988 as a 501(c)(3) corporation to ensure the effective implementation of the Final 1986 River Management Plan for the Congressionally-designated Upper Delaware Scenic and Recreational River and oversee its administration on a continuing basis, utilizing the existing authorities of its members.

Its voting members are the two states – New York and Pennsylvania – and 13 out of the 15 local governments that border along the 73.4-mile Upper Delaware River in the five-county region of the corridor that encompasses 55,574.5 acres of primarily privately-owned property. The Delaware River Basin Commission is a non-voting member, while the National Park Service is the UDC’s federal partner.

The River Management Plan outlined that the NPS would seek a line-item appropriation within the DOI budget, contingent upon the approval of funds by Congress, as a direct contribution to the UDC’s operation. The Plan proposed a 60% federal/40% States cost-sharing ratio for a $500,000 preliminary budget; however, funding requests to neither state have been successful to date and the $300,000 federal appropriation from 1988 has remained static.

For more information on the Council’s history and operations, please visit https://upperdelawarecouncil.org or call (845) 252-3022.