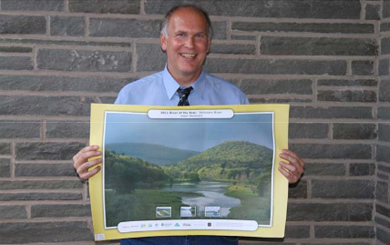 NARROWSBURG – A photograph by Upper Delaware Council, Inc.
(UDC) Senior Resource Specialist David B. Soete highlighting the Upper Delaware Scenic and Recreational River at Point Mountain in Hancock, NY graces a poster recently issued to celebrate Pennsylvania’s 2011 designation of the Delaware as its River of the Year.

A four-poster series was released in deference to the Delaware River’s diversity. Images were selected in June and the posters were printed in late August.

Soete had provided the poster image as well in June 1995 when the Delaware was previously honored as Pennsylvania’s River of the Year, with a photograph depicting Kilgour Spur near Equinunk, PA. Pennsylvania has presented an annual River of the Year program since 1983.

For the first time in 2011, the Pennsylvania Department of Conservation and Natural Resources (DCNR) and the Pennsylvania Organization for Watersheds and Rivers (POWR) made the selection through a public nomination and voting process.

A Delaware River of the Year Steering Committee chaired by Kate O’Hara from the Delaware River Basin Commission has been meeting since January to coordinate a series of activities to highlight the designation.

Further information and a listing of events are available online by visiting www.riveroftheyear.com
.