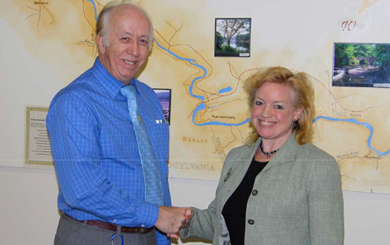 NARROWSBURG – The Upper Delaware Council, Inc. (UDC) has promoted Laurie Ramie as Acting Executive Director to succeed William E. Douglass in the position that he held for 22 years before retiring on Jan. 1, 2012.

Ramie began employment with the UDC on April 21, 1997 as the Public Relations/Fundraising Specialist. She will continue to fulfill those responsibilities while taking over the staff leadership role.

“Laurie Ramie has demonstrated an ability to interact positively with fellow staff members and the public, and to accept and complete work assignments in a timely and professional manner,” said 2011 UDC Chairperson Representative Larry H. Richardson, Town of Cochecton, NY, in announcing the unanimous appointment that was effective on Dec. 5, 2011.

She worked in community journalism for almost 10 years as a reporter, photographer, editorial assistant, and supervising editor for newspapers in St. Lawrence County and Sullivan County, NY. Prior to joining the UDC, Ramie was the editor of the Sullivan County Democrat as published by Catskill-Delaware Publications.

Ramie has resided in Hortonville, NY (Town of Delaware) since 1992.

The Upper Delaware Council, Inc. was established in 1988 to oversee the coordination and implementation of the River Management Plan for the
Upper Delaware Scenic and Recreational River, which the U.S. Congress designated as a unit of the National Park System in 1978.

The non-profit organization’s voting members are the two states (New York and Pennsylvania) and 13 local towns and townships that border on the Upper Delaware River. The Delaware River Basin Commission is
a non-voting member. The UDC operates under a Cooperative Agreement with the National Park Service. Each member appoints a representative to the UDC’s board to set policy and guide the direction of this conservation-oriented partnership of land, water, and people.