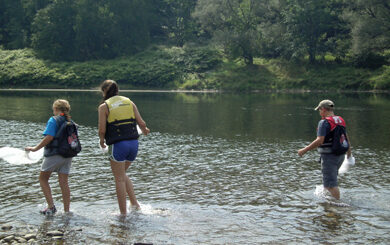 Since 2014, the UDC has disbursed a total of $37,006.71 in support its member municipalities to organize clean-ups in the river and along the banks of their localities to help maintain the pristine quality of the Upper Delaware Scenic and Recreational River.

Priority is given to projects that get adult and youth volunteers involved, show local investment, and reflect a commitment to become self-sustaining. Respect for private property rights is paramount during clean-ups.

Interested towns and townships must submit a letter to the UDC describing their project, an estimated budget with a breakdown for materials and services, the funding amount requested, and contact information for a project leader.

The UDC’s Operations Committee will review applications at its April 26 meeting and the full Council is expected to vote on the awards on May 5.
Successful applicants will have until September 23 to complete their projects and submit a request for reimbursement.

The UDC non-profit organization opts to share with its membership a portion of its federal operational funding that the National Park Service (NPS) allocates in the form of mini-grants for river sweeps and technical assistance projects.

The River & Shoreline Clean-up Grants Program began in 2014 after the NPS discontinued its direct contributions to municipalities for trash removal.