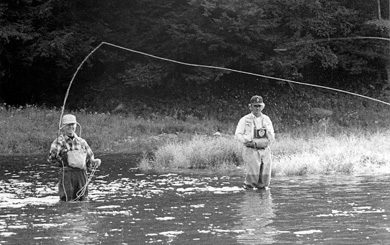 Photo caption: President Jimmy Carter enjoyed fly-fishing on the Upper Delaware River, as guided by Ed Van Put, right, in September 1984. The late Phil Chase, who served as the Town of Deerpark’s UDC Representative from 1994 to 2011, guided First Lady Rosalynn Carter in fishing at Dark Eddy.

The special 12-page publication offers historic and contemporary articles and photos about the evolution of the Upper Delaware Scenic and Recreational River, which the U.S. Congress designated as a unit of the National Wild and Scenic Rivers System in 1978, and of the UDC, which was incorporated as a 501(c)(3) non-profit organization in 1988.

The Upper Delaware Council represents the interests of 13 participating local governments, the State of New York, the Commonwealth of Pennsylvania, and the Delaware River Basin Commission under a Cooperative Agreement partnership with the National Park Service to jointly manage the 73.4-mile river corridor that encompasses 55,574.5 acres of mostly private property in portions of five counties and 15 towns and townships.

The 50th anniversary of the 1968 National Wild and Scenic Rivers Act that was established to preserve certain rivers (currently less than one-quarter of one percent) with outstanding natural, cultural, scenic and recreational values in their free-flowing condition for the enjoyment of present and future generations is also commemorated in the issue.

To view the newsletter on-line, click on https://upperdelawarecouncil.org/wp-content/uploads/2018_Anniversary_Newsletter.pdfor go to the Publications page of the UDC website, which also offers an archive of past issues.

The newsletter about the environment and people of the Upper Delaware River Valley in New York and Pennsylvania has been published free of charge by the UDC since 1988.

The next, regular Fall/Winter 2018 issue will be published on October 1st. Starting in 2019, the UDC plans to increase its publications from two to three newsletters per year.