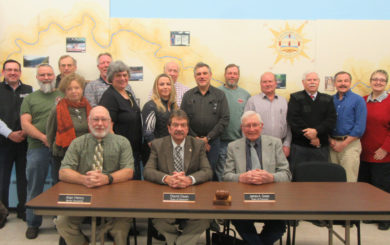 NARROWSBURG – Town of Fremont Supervisor George Conklin officiated at the swearing-in ceremony for the Upper Delaware Council’s (UDC) 2017 officers held during the Feb. 2 monthly meeting of the bi-state, non-profit organization.

Members appoint representatives and alternates to serve on the UDC board. Following municipal reorganizational meetings, the 2017 roster is:

The river corridor extends 73.4 miles from the confluence of the East and West Branches of the Delaware River below Hancock to Railroad Bridge No. 2 at Sparrowbush. It encompasses 55,574.5 acres that remain in majority private ownership within portions of Delaware, Sullivan, and Orange Counties in NY; and Wayne and Pike Counties in PA.