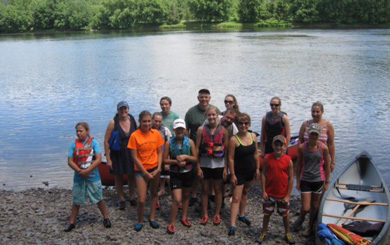 The UDC expended a total of $5,472.98 to facilitate litter removal in the Upper Delaware Scenic and Recreational River and along its banks based on proposals submitted in April by five towns and townships.

Thirty-seven members, parents, and volunteers split into two groups to work on the Pennsylvania shore from Callicoon to Skinners Falls, and on the New York State shore from Skinners Falls to Narrowsburg.

They collected 11 tires, one bicycle, and numerous bags of trash.

“We all enjoy this opportunity to not only help our natural resource, but help keep our community clean and safe for everyone to enjoy for many years to come. We also enjoy the river and our time together as a club,” said 4-H Leader Jenn Noble.

The Town of Deerpark, NY accomplished two clean-ups in early and later summer. Town highway workers picked up 30 bags of garbage along 2.9 miles of the famous Hawk’s Nest section of New York State Route 97 and focused on the Mongaup River tributary to the Delaware.

“As the gateway to the Upper Delaware Corridor, we are always looking for ways to improve the experience for visitors entering this special place,” said Town of Deerpark Deputy Supervisor and UDC Representative David Dean.

The Town of Lumberland, NY contracted with Ann Steimle to clean up river trash from the vicinity of Camp Tel-Yehudah to the Mongaup River Access which borders the Town of Deerpark.

“Lumberland has always been part of the summer river shoreline clean-up funded by the National Park Service and has continued the river clean-up even when those funds were discontinued,” said Supervisor Jenny Mellan.

The Town of Tusten, NY contracted with K&D Freda Enterprises, who charged for two river clean-up trips and donated a third patrol from the town’s borders with Highland and Cochecton. Their work was supplemented by river litter plucks conducted by Boy Scouts from the Ten Mile River headquarters during raft trips, with the town taking on the cost for disposal of garbage and recyclables.

The Upper Delaware Council works in partnership with the National Park Service to oversee administration of the River Management Plan for the Upper Delaware Scenic and Recreational River, which the United States Congress designated for recognition in 1978 under the National Wild and Scenic Rivers Act.

Established as a non-profit organization in 1988, the UDC’s members are 13 local governments, the State of New York, Commonwealth of Pennsylvania, and Delaware River Basin Commission.