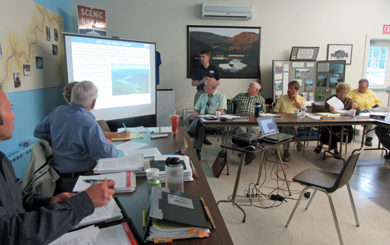 UDC Meeting: The Upper Delaware Council approved the funding letter at its June 1, 2017 meeting, which also included a presentation by Paul Rush, deputy commissioner of the New York City Department of Environmental Protection, on the topic of improving the public notification system for incidents involving the Delaware Basin Reservoirs. (Photo by Laurie Ramie)

The Upper Delaware Council unanimously approved a letter to the U.S. Department of the Interior Secretary Ryan Zinke in Washington, D.C. and the National Park Service Northeast Region Acting Regional Director in Philadelphia, PA expressing concerns over a delay in receiving the balance of funding due under the organization’s Cooperative Agreement for Fiscal Year 2017, covering Oct. 1, 2016-Sept. 30, 2017.

The Upper Delaware Council, Inc. (UDC) – the non-profit organization of state and local governments which has partnered with the National Park Service since 1988 to coordinate administration of the River Management Plan for the Upper Delaware Scenic and Recreational River – respectfully wishes to make you aware of two priority issues impacting our provision of services under Cooperative Agreement P15AC01769.

1) A current delay in processing modifications to Cooperative Agreements for Fiscal Year 2017 has resulted in the depletion of funds in our federal allocation account as of May 24, 2017.

Impacts: The UDC is only able to continue functioning by dipping into a limited pool of unrestricted funds. This is despite having an executed Cooperative Agreement covering a performance period of September 2015-2020 in which the National Park Service agreed to provide financial assistance, at a projected level of $300,000 per year, to enable the UDC to carry out its approved Statement of Work. Prior to the passage of Omnibus Bill (P.L. 115-31), the UDC was allocated $57,240 (19.08% share) for 10/1/16-12/9/16 and $114,870 (57.37%) for 12/10/16-4/28/17 under Continuing Resolutions, with no funds available to us since then. We understand that the funding delay is a result of the time it took to pass the federal budget, NPS Northeast Region staffing issues that have created a processing backlog, and the Secretary’s new directive to implement a temporary, Department-wide requiring an additional level of review of existing FY 2017 grants and cooperative agreements of $100,000 or more before final awards are authorized; however, this presents a hardship for our organization’s sustainability. Furthermore, the funding procedure which requires the UDC to apply for monthly payment requests via ASAP.gov based on expenses accrued wholly relies on the UDC’s ability to advance the necessary funding and await reimbursement.

2) No adjustment has been made to the UDC’s $300,000 allocation that comes as a line-item appropriation through the NPS Upper Delaware Scenic and Recreational River budget since our 1988 inception.

Impacts: The Final River Management Plan (1986) that was collaboratively developed based on Section 704 of Public Law 95-625 establishing the Upper Delaware Scenic and Recreational River proposed an annual operating budget cost-sharing ratio of 60% federal and 40% state contributions for the Upper Delaware Council. However, neither New York State nor the Commonwealth of Pennsylvania has provided those anticipated shares. The flat-level federal allocation does not account for inflation, the exponential growth in operating expenses, and an increasing number of threats and pressures on the river corridor’s resources. No carry-over of federal funding is allowed beyond the fiscal year. Also, the Plan envisioned that the UDC would need five professional positions to adequately carry out the directives of the Council board whose voting delegates are appointed by the two states and currently 13 local governments. That included two staff members dedicated to the project review and substantial conformance work for land use developments within the 55,574.5-acre river corridor that is at the heart of the UDC’s Cooperative Agreement tasks. As of Dec. 5, 2011 to realize a budget savings, the UDC eliminated one of its previous four full-time positions by absorbing the duties of the public relations/fundraising specialist into the position of executive director, who provides support services along with a resource specialist and a secretary for a total of three staff members without any corresponding reduction in the workload. An extremely tight Fiscal Year 2018 budget is projected which will require cutting programs to our members to accommodate increased operating expenses.

The 1978 designation of the Upper Delaware Scenic and Recreational River unit of the National Wild and Scenic Rivers System was groundbreaking in that a commitment was made to rely on local land use controls and voluntary actions by landowners to protect the river valley’s resources, while the federal role is to manage the recreational use of the river, represent the federal interest in maintaining the area’s Outstandingly Remarkable Values, and assist local and state governments in meeting the objectives of the River Management Plan and the Land and Water Use Guidelines.

The cooperative management approach successfully forged after a decade-long process of plan re-writes and compromises sets the Upper Delaware apart from a traditional national park and justifies consideration of the special partnership that exists.

The Upper Delaware Council enthusiastically supports Congressman John Faso’s invitation to Secretary Zinke to visit the Upper Delaware Scenic and Recreational River to witness what we’ve accomplished collectively and what challenges lie ahead. We look forward to any opportunity to provide additional information. Please contact UDC Executive Director Laurie Ramie at (845) 252-3022 or laurie@upperdelawarecouncil.org to facilitate arrangements or with any questions.