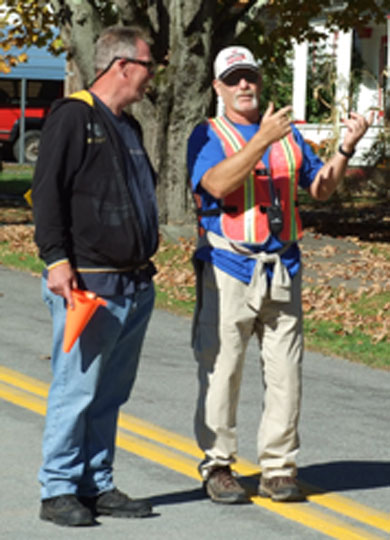 All three officers will be sworn in at the UDC’s next monthly meeting on Feb. 4, which will include a public reception with cake and coffee.
Chairperson

The Town of Hancock appointed Fred Peckham as its UDC alternate in 2008, and he became the representative in January 2009.
Peckham graduated from Hancock High School in 1978 and went on to earn a Bachelor’s degree in Marketing from SUNY Oswego School of Business.

The Hancock native resided in Virginia for 18 years, first working as an outside sales representative for a company that offered plastics, adhesives, and tapes, then selling commercial construction coating products.

He transitioned from sales to construction, traveling the East Coast as a supervisor for the development of high-rise hotels and then working as a service foreman for a commercial roofing company.

In the early 2000’s, Peckham decided to start his own business. He opened Fred Bluestone in Front Royal, VA, with the raw materials imported from Hancock.

When Peckham’s uncle, George Frosch, died on Oct. 12, 2002, he returned to the river valley to take over his business of selling bluestone, sand, gravel, and topsoil from his 284-acre property known as Kilgour Farms upriver of Lordville, NY, where Peckham worked and played throughout his youth. Property maintenance responsibility includes Frisbee Island in the Upper Delaware River and nearly two additional miles of river frontage.

Peckham is carrying on a family legacy of service to the Upper Delaware Council given that Frosch was the Town of Hancock’s representative from the organization’s inception in 1988 through 2002.

The 55-year-old chairs the Town of Hancock Board of Assessment Review, and serves as a volunteer member of the Equinunk Watershed Alliance and global moderator of the public forum website, www.naturalgasforum.com, whose 3,700 members post opinions and findings on natural gas exploration topics.

Vice-Chairperson
Jeff Dexter will serve as the Council’s vice-chair in 2016.

Dexter, who was instrumental in Damascus Township’s July 21, 2008 decision to join the UDC, was appointed as first alternate representative in January 2010 before assuming the UDC representative position in 2012. That same year, he served as the Council’s vice-chair, was elected as chairperson in 2013, and filled the secretary-treasurer position in 2015.

Dexter retired from the Damascus Board of Supervisors at the end of 2015 following a 10-year tenure, including six years as chairman. He was appointed to a six-year term as Township Auditor effective Jan. 4, 2016.

He is the Volunteers-in-Mission Team Leader for disaster recovery projects through the Damascus Methodist Church, the sponsor’s representative to the Northeast Council of the Boy Scouts of America for Troop 122 in Damascus, a member of the Penn State Extension Agricultural Board for Wayne County, is active with the Damascus Volunteer Ambulance Corps, and belongs to numerous local historical societies.

Jeff and his wife, Linda, built their log home in Damascus. They have three children, Kari, a physical therapist in Tucson, AZ; Bethany, a teacher in Schenectady, NY; and Jonathan, an officer with the Arizona Highway Patrol.

Secretary-Treasurer
Al Henry was appointed by the Berlin Township Board of Supervisors as its UDC delegate on Jan. 3, 2012. He chaired the Council in 2015 after having previously served as its secretary-treasurer from Aug. 1, 2013 through the end of 2014.

A native of Beach Lake, PA, Henry was employed by the National Park Service (NPS) for 32 years before retiring on June 1, 2009 as Chief Ranger of the Upper Delaware Scenic and Recreational River.

The Honesdale High School graduate earned a Bachelor’s degree in Recreation and Parks from Penn State University in 1976 and studied Outdoor Education at the University of Northern Colorado before joining the NPS ranks in 1977, serving all but two years of his tenure in the Upper Delaware.

Al and his wife, Karen Carlson, are the parents of Dr. Alana Rickard who works at Pediatric Practice and lives in Beach Lake, and Dylan Henry, an attorney with the Powell Trachtman firm who resides in Ardmore, PA.

Its members are 13 local governments (eight NY towns and five PA townships), the State of New York, the Commonwealth of Pennsylvania, and the Delaware River Basin Commission.

For more information, please call the Narrowsburg business office at (845) 252-3022 or visit the website at www.upperdelawarecouncil.org.