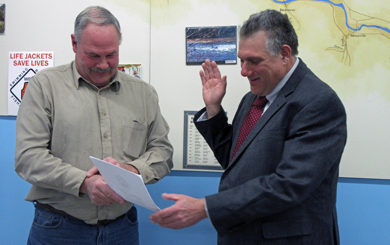 All three officers were sworn in at the UDC’s next monthly meeting on Feb. 1.

Aaron Robinson is accepting his first officer position with the Council. He succeeds James A. Greier of the Town of Fremont in the chairperson’s seat.

Robinson was appointed on Jan. 3, 2012 as Shohola Township’s 2nd alternate to the UDC board, became the 1st alternate in 2015, and took over as representative in 2016. He has served on the Project Review and Operations Committees, as well as the Personnel Subcommittee.

The 62-year-old graduated from Eldred High School in 1973 after his family made the permanent move from New York City to their river-side property in Barryville in 1969.

Robinson completed the Agricultural and Life Sciences School program at Cornell University in Ithaca in an accelerated three years, during which time he served as the 18-year-old secretary-treasurer of an activist group called Catskill Waters that prompted New York City to settle a lawsuit out-of-court to compel more balanced reservoir releases in support of the Delaware River fishery.

Robinson worked after college for the Lovelace family who owned Jerry’s Three River Canoes and had a part-time sawmill operation in Barryville. He opted to purchase the latter business at the age of 21 and successfully operated Robinson’s Sawmill for 24 years, with two international patents for wood-related equipment to his credit.

For the past 20 years, Aaron and his wife Randy have lived along the Shohola Creek in Shohola Township, PA, where he manages an 800-acre timber stand and Firewood-on-Time, a business for which he cuts, splits, and delivers firewood.

Robinson has served on the Shohola Township Planning Commission since 2009, is a trustee and cemetery coordinator of Temple Beth-El Synagogue in Port Jervis, and assists with philanthropic projects of the New York State Lumberman’s Insurance Trust Fund. He is a former member of the Highland Zoning Board of Appeals and the Eldred Central School Board of Education.

“Dave” Dean will serve his second consecutive term as Vice-Chair of the Council. He is also a member of the Project Review and Operations Committees.

The Town of Deerpark appointed him as its UDC representative on Oct. 17, 2011.

The councilman and deputy supervisor graduated from Port Jervis High School in 1968, studied architecture and land use at the University of Miami for two years, enlisted in the U.S. Navy for which he served as a Machinist Mate from 1971-72, and then worked for 10 years as a project manager for a Connecticut developer.

For the past 20 years, Dave and his wife Michele have been self-employed as distributors for Dispoz-A-Blade LLC, which offers a line of German tooling products used to finish lumber, and the couple also manages real estate holdings.

Dave and Michele have been married for 40 years and have two daughters. Alyson and her husband Joseph live in Middletown, NY with their two sons. Erin and Padraic live in Ossining, NY.

Dean is a member of the Town of Deerpark Republican Committee and the Cahoonzie Hunting Club.

He enjoys fishing, hunting, road trips in their BMW sports car, and spending time with family.

“Al” Henry was appointed by the Berlin Township Board of Supervisors as its UDC delegate on Jan. 3, 2012.

Al and his wife, Karen Carlson, are the parents of Dr. Alana Rickard of Beach Lake and attorney Dylan Henry of Ardmore, PA, and are the grandparents of Beau, the son of Alana and Bart Rickard.

The UDC’s members are 13 local governments (eight NY towns and five PA townships) that have property along the river, as well as the State of New York, the Commonwealth of Pennsylvania, and the Delaware River Basin Commission.

For more information, please contact the Narrowsburg business office at 211 Bridge St., (845) 252-3022, or visit the website at www.upperdelawarecouncil.org.