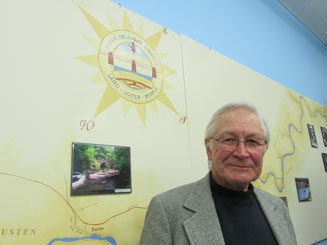 Pictured at right: James A. Greier

NARROWSBURG – The Upper Delaware Council, Inc. (UDC) board elected Town of Fremont Representative James A. Greier to serve as its 2017 chairperson at the non-profit organization’s annual meeting held Jan. 5.

All three officers will be sworn in at the UDC’s next monthly meeting on Feb. 2, which will include a public reception with cake and coffee.

“Jim” Greier becomes the first Town of Fremont representative to chair the Upper Delaware Council in the organization’s 29-year history.

He was originally appointed as an alternate from January 2000 to Nov. 10, 2004, then returned to the board as a second alternate on March 18, 2013 to replace Jim Rodgers after he moved away. Greier accepted appointment as the town’s UDC representative effective Aug. 14, 2013 following the death of John B. Niflot, who had fulfilled a 19-year tenure for Fremont.

Greier has experience in municipal leadership as a former town assessor, councilman, and 12 years as town supervisor starting in 1999. He previously served a four-year term on the Board of Education for his alma mater, Delaware Valley Central School, and chaired the Sullivan County Democratic Committee.

He earned a Mechanical Engineering degree from Pratt Institute in Brooklyn in 1955.

The 83-year-old resides on the same property in Obernburg, NY where his grandparents, the Tempels, ran a boarding house. The Greier family expanded that business into the 200-acre Little Texas Ranch which they operated as a working dude ranch and hotel from 1962 to 1987. Today they continue to care for a stable of 25 Arabian horses, board other horses, farm hay and oats, host antique auctions, and put on occasional catered events.

Since 2011, Greier has been employed by the New York State Gaming Commission as a racing inspector at Monticello Raceway. Previous jobs included working as a tool and die maker on Long Island then at the Bard Parker plant in Hancock, four years automating the production system at Dedeco International in Long Eddy, and part-time work as a machinist at Ike’s Auto Parts in Monticello.

Greier toured steadily throughout the Catskills and upstate New York as a guitarist and vocalist with “The Texans”, and continues to perform country and western music.

He is a member of St. Mary’s Church and Holy Name Society of Obernburg, where he conducts a weekly guitar mass; chairman of the Town of Fremont Democratic Committee; is on the committee to plan the town’s 133rd Annual Memorial Day Parade; serves on the Sullivan County Farm Bureau Board of Directors, and belongs to the Knights of Columbus.

Hobbies include hunting, float fishing, and sports, with a special love for baseball which he coached at every youth level.

Jim and his wife of 44 years, Rita, have three children, James of Obernburg; Anthony of Hopewell Junction, NY; and Patricia of Middletown, NY. They have three grandsons, with their first granddaughter due in March.

“Dave” Dean will serve his first officer’s role with the Council since the Town of Deerpark appointed him as its representative on Oct. 17, 2011. He is also a member of the Project Review and Operations Committees.

The councilman and deputy supervisor graduated from Port Jervis High School in 1968, studied architecture and land use at the University of Miami for two years, enlisted in the U.S. Navy for which he served as a Machinist Mate from 1971-72, and then worked for 10 years as a project manager for a Connecticut developer.

For the past 19 years, Dave and his wife Michele have been self-employed as distributors for Dispoz-A-Blade LLC, which offers a line of German tooling products used to finish lumber, and the couple also manages real estate holdings.

Dave and Michele have been married for 39 years and have two daughters. Alyson and her husband Joseph live in Middletown, NY with their two sons. Erin and Padraic live in Ossining, NY.

Dean is a member of the Town of Deerpark Republican Committee and the Cahoonzie Hunting Club.

He enjoys fishing, hunting, road trips in their BMW sportscar, and spending time with family.

“Al” Henry was appointed by the Berlin Township Board of Supervisors as its UDC delegate on Jan. 3, 2012.

He chaired the Council in 2015 after having served as its secretary-treasurer from Aug. 1, 2013 through the end of 2014 and again in 2016. He sits on all three UDC standing committees and chairs its Personnel Subcommittee.

Al and his wife, Karen Carlson, are the parents of Dr. Alana Rickard of Beach Lake and attorney Dylan Henry of Ardmore, PA, and are the grandparents of Beau, the six-month-old son of Alana and Bart Rickard.

The UDC’s members are 13 local governments (eight NY towns and five PA townships) that have property along the river, as well as the State of New York, the Commonwealth of Pennsylvania, and the Delaware River Basin Commission.

For more information, please contact the Narrowsburg business office at 211 Bridge St., (845) 252-3022, or visit the website at www.upperdelawarecouncil.org.