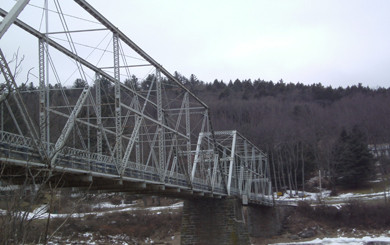 The Upper Delaware Council is calling upon the Department of Transportation to update the public on the future of the currently closed Milanville, PA-Skinners Falls, NY Bridge.

On December 11, 2015, PennDOT suddenly closed the Skinners Falls Bridge with a brief press announcement stating, “There is no scheduled timeline to reopen the 114-year-old bridge.” There has been no official information since then to detail what is transpiring with regards to discussion of repair or replacement options. This indefinite situation is unacceptable.

Municipal leaders, community residents, local business owners, and the traveling public are entitled to an explanation of the timetable and issues involved in deciding this bridge’s fate. We respectfully urge PennDOT to schedule a public meeting to offer an update.

Subsequent media reports elaborated that the bridge had most recently failed inspection due to damaged stringers presumably caused by ongoing traffic on the steel truss, timber plank, single-lane bridge built in 1901. This represents at least the third time in recent years that the bridge was closed temporarily for repairs in January 2010 and then from Dec. 15, 2012 to May 20, 2013.

In July of 2013, the Upper Delaware Council, Inc. (UDC) was invited to become a Consulting Party for Section 106, the federal process required for properties listed on the National Register of Historic Places. We submitted comments on the Area of Potential Effect document (ER 2013-8011-127) that had been prepared in anticipation of PennDOT undertaking “a full rehabilitation of the existing truss bridge,” according to the project description.

However, we never received any additional information about it or any direct notice of the bridge’s most recent closure, instead only learning about it from a newspaper reporter.

Convening a public meeting is vital to confirm and clarify the long-range plans.

As you may know, there is currently an online petition drive underway that speaks to this closure’s adverse impacts that will be exacerbated the longer it continues. Although the Skinners Falls Bridge has been restricted from heavy loads for decades, it still sees its share of commercial and residential traffic in terms of people going to work, light service trucks, shopping, day care, church, and supporting the local tourism trade. Furthermore, emergencies have no respect for political boundaries, even if it is across a river. The first response for fire service along the Pennsylvania side comes from New York State. Even though fire trucks may not cross the bridge, most volunteers report directly to the scene from home or work, responses that are now delayed.

With the anticipated Spring 2017-Fall 2018 rehabilitation of the currently single-lane Narrowsburg Bridge which is being utilized as a detour route, there will be additional restrictions to interstate traffic. All the issues mentioned above will be magnified and worsened if the Skinners Falls Bridge is not reopened prior to the rehabilitation of the Narrowsburg Bridge.

Our organization would be happy to facilitate PennDOT’s arrangements for a public meeting. Please contact UDC Executive Director Laurie Ramie at P.O. Box 192, Narrowsburg, NY 12764, (845) 252-3022 or laurie@upperdelawarecouncil.org for that purpose and to share any future updates about the Milanville, PA-Skinners Falls, NY Bridge with our bi-state constituency.