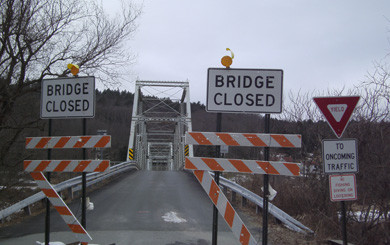 BINGHAMTON – The New York-Pennsylvania Joint Interstate Bridge Commission approved $37.5 million worth of replacement and repair costs targeting five Upper Delaware River bridges at its May 18 annual meeting, while agreeing to hold a public meeting locally to discuss the overall coordination of bridge projects.

Officials from the National Park Service Upper Delaware Scenic and Recreational River and Upper Delaware Council (UDC) had requested at the 2015 Bridge Commission meeting that the New York and Pennsylvania Departments of Transportation (DOT) arrange a joint presentation in the impacted river valley to explain how the 10 interstate bridges are managed, their conditions, and timetables for upcoming work plans.

Dave MacEwan, NYS DOT Regional Planning Office Liaison, said that while the agencies do convene outreach meetings for specific bridge projects as they arise, he acknowledged that “it can be difficult to see the big picture.”

MacEwan reported that he will take up the UDC on its offer to facilitate arrangements, adding, “We will hold it this summer. This remains a priority.”

The $37,512,605 that the Commission approved at its Binghamton meeting for capital construction work does not include an additional $4,335,997 that currently falls into the “unfunded” category, for which both New York and Pennsylvania will have to budget in order to cover the total projected cost of $41,848,602.

First up will be $1,053,350 in emergency repairs to the 1901 Skinners Falls, NY-Milanville, PA Bridge to enable this single-lane crossing to reopen to traffic at the end of this summer.

The Baltimore truss bridge which is listed on the state and National Register of Historic Places was abruptly closed on Dec. 11, 2015 after a routine inspection revealed “worsening deficiencies and signs of overload”, according to PennDOT.

These actions are designed to return the bridge to its 4-ton capacity weight limit. To help assure that oversized vehicles don’t attempt to cross the bridge and cause further damage, two overhead clearance bar portal frames commonly referred to as “headache bars” will be newly installed.

Municipal leaders, community residents, local business owners, and travelers were frustrated when the bridge was shut down in December for the third time since 2010 and no timetable was given for when its condition would be addressed.

An online petition and advocacy letters urged PennDOT to consider the impacts on commerce, recreation, public convenience, and emergency services, as well as the fact that the Skinners Falls Bridge’s detour route sends motorists to the Narrowsburg Bridge which itself is down to one lane and due for a major overhaul starting in 2017.

Having recently awarded the contract, construction is due to begin in July and continue over two seasons with the goal of having traffic flow on the new bridge by Winter 2018 and completing demolition of the current bridge by Fall 2019.

At last year’s meeting the anticipated price tag for the new bridge – which has been contemplated for more than 20 years but faced opposition from historic preservationists – had been $15.5 million. The bridge was most recently closed then restricted to limited use after a loaded dump truck on Oct. 21, 2015 lost its brakes going downhill on County Rt. 41 on the NY side, crossed over NYS Route 97, and crashed on the PA side. Repairs to the resulting damage were completed on Dec. 30.

While the new bridge will retain an aesthetically similar curved steel truss design with PA bluestone pier and abutment treatments and a taupe color scheme, the weight limit will increase from 7 tons to the standard 40 tons by replacing the current timber boards with concrete. A six-foot pedestrian sidewalk and more open railing style to enhance river views are part of the design plan which included advisory committee input.

DOT engineers confirmed that construction of the 504-foot long, two-span, single-lane bridge will require building a temporary rock causeway in the Delaware River to stage the equipment because of the limited access in land-locked Pond Eddy, PA. Vehicular traffic will be maintained on the old bridge 55 feet downstream while construction progresses to build the new structure out from the NY side in phase one, with boating traffic diverted accordingly, before the switch is made to the PA side.

Two 2017 projects were approved on the contract schedule.

A major rehabilitation of the 1953 Narrowsburg, NY-Darbytown, PA Bridge will begin next spring at a cost of $11,664,884 for construction and inspection, which excludes a 2016 expense of $780,000 for the final design phase.

After a Nov. 2012 inspection found advanced deterioration and corrosion, the bridge was down-posted to 15 tons as of Jan. 8, 2013, with emergency repairs completed in August 2013 that removed the load posting but reduced traffic to a single lane controlled by signals until the rehabilitation could be designed and funded.

Town of Tusten Councilwoman Brandi Merolla attended the meeting to ask whether there had been any changes to the plans that PennDOT had presented at a July 29, 2015 public meeting in Narrowsburg following public pressure to address the delay.

She learned that 15 overnight closures during the Spring 2017 to Fall 2018 work period are still considered the maximum required to accommodate the installation and removal of a temporary steel barrier down the bridge’s center lane as construction progresses on one side at a time with single lane traffic allowed otherwise. Advance notification will be provided, particularly to emergency service providers.

The railing style is still under investigation, the color will remain green, and the flush-filled concrete deck that will replace the open grid will help diminish the noise.

Plans to replace the steel grid deck, repair steel work, paint, and do the final inspection will require closing the single-lane bridge for at least a portion of the time.

The fifth bridge on the capital construction list is the 1961 Callicoon, NY-Damascus, PA Bridge, for which $500,000 was approved on the 2016 schedule to undergo final design for a 2018 replacement of the two-lane deck and repairs to the substructure. A public outreach meeting will be held as the project advances.

As a result of various deficiencies identified when the 16-member NY-PA inspection crew visited all of the Upper Delaware bridges on April 14, the highest estimated amounts for maintenance will be spent on the Callicoon-Damascus Bridge ($34,400), the Barryville-Shohola Bridge ($28,060), and the Narrowsburg-Darbytown Bridge ($21,000), followed closely by the Cochecton-Damascus Bridge ($20,000).