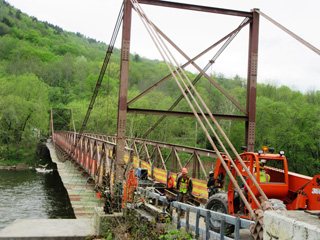 Photo: The $4.49 million rehabilitation of the Kellams, NY-Stalker, PA Bridge is due to wrap up by June 29, which will temporarily end the 22-mile detour in place until it closes again for approximately two months after Labor Day for painting.

BINGHAMTON – Three Upper Delaware River bridges that remain under construction or renovation are on track to re-open to traffic this summer and fall.

The New York-Pennsylvania Joint Interstate Bridge Commission updated the status of the 10 bridges under their care at the May 15 annual meeting in Binghamton chaired by Pennsylvania Department of Transportation District 4-0 Executive George J. Roberts.

On May 25, traffic on the 1953 Narrowsburg, NY-Darbytown, PA Bridge will switch over to the lane where a new closed-grid deck has been installed to allow completion of the second phase by this fall. Four overnight closures will be announced to remove the central steel barrier at the end. The bridge has been reduced to a controlled single lane since August 2013.

The nearly $4.5 million renovation project on the Kellams, NY-Stalker, PA Bridge, which last underwent a major re-build in 1990, will be finished by June 29. That will temporarily end a 22-mile detour through Callicoon in time for the summer season, pending another two-month closure starting after Labor Day to paint the single-lane suspension bridge.

The new Pond Eddy, NY-Pond Eddy, PA Bridge will be ready for its first vehicles to cross in late September or early October. With the NY side of the truss in place, the PA span is now under construction as boaters divert around a temporary causeway. The 1904 National Register of Historic Places structure will then be razed in a November-December timeframe.

The only new capital construction project that the Bridge Commission approved for this fiscal year (April 1, 2018-March 31, 2019) was to allocate a $500,000 shared cost for final design of superstructure replacement and substructure repairs of the 1961 Callicoon, NY-Damascus, PA Bridge.

A contract will be awarded this summer, with work to take place in 2019-2020 involving alternate one-way traffic. Engineers at a Nov. 2, 2016 public information meeting anticipated an estimated cost of $9.9 million to replace the deck, curb, sidewalk and railings; repair bridge bearings, concrete piers and abutments; clean and paint the structure; and armor the piers to mitigate the effects of scour, among other work. The project was deferred from original intentions to start construction in spring 2018.

All ten Upper Delaware bridges were inspected on April 11, with reports and photos provided of those findings.

Maintenance and snow & ice control costs totaling $107,853 were detailed through March 31. The highest expenditures were on the Callicoon-Damascus Bridge ($22,672); the Port Jervis-Matamoras Bridge ($20,676); and the 1901 Skinners Falls, NY-Milanville, PA Bridge ($14,480), much of which was to repair frequent damage to the “headache bars” that were installed to try to prevent oversized vehicles from using it.

A similar level of spending – $101,525 – was approved for the General Maintenance Fund in the next fiscal year based on needs identified during the inspections.

D.A. Collins Construction Inc. of Catskill, NY is the subcontractor for both the $18.9 million Pond Eddy Bridge construction 55 feet upstream of the existing timber deck structure that began in July 2016 and the $6.7 million Narrowsburg-Darbytown Bridge rehabilitation that also involves replacing sidewalks, railings, patching, and painting.