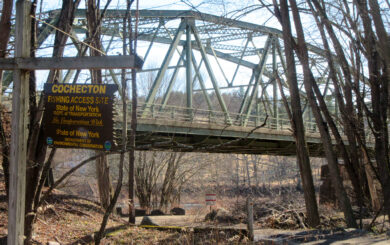 RIVER VALLEY – In a brisk 52 minutes, the New York-Pennsylvania Joint Interstate Bridge Commission approved two capital projects and two studies totaling $9,749,088, while also reviewing inspection findings and green-lighting $169,916 for 2021-2022 maintenance for its 10 bridges at the May 26 annual (virtual) meeting.

The 1953 Cochecton, NY-Damascus, PA Bridge was reduced to a single lane of traffic that same day to initiate its $7,067,088 deck replacement. Awarded on April 30, the contracted work is scheduled for completion by October 31, 2022.

It found more significant deterioration that increased the scope of work from a repair of the existing deck to its removal and replacement. There will also be a new sidewalk, approaches, railing, and pedestrian fence installed.

The DOT consulted with local officials and emergency responders in the decision to stage the construction over two seasons to enable traffic flow with a temporary signal in place, rather than do the job faster but with a full bridge closure requiring a 22-mile detour.

The Commission approved $2,212,000 to design a major rehabilitation of the 1961 Callicoon, NY-Damascus, PA Bridge, for which no construction schedule was yet announced.

Inspection of Bridge #7 found heavy spalling on the substructure with exposed and missing reinforcement bars on all piers and abutments, the wearing surface cracked with potholes, steel members deteriorating rapidly, and the paint at the end of its life cycle.

The controversial study into the repair, replacement or removal of the 1902 Skinners Falls, NY-Milanville PA Bridge received a $400,000 earmark to fund the Planning and Environmental Linkages Study (PEL) that is underway.

The rare Baltimore truss, single-lane, timber-deck crossing listed on the State and National Registers of Historic Places has been closed since October 16, 2019 after failing an emergency safety inspection.

A March 30 virtual public meeting drew 143 participants with a unanimous outcry among speakers to retain the bridge for its importance to the small communities it serves, while opinions were split over favoring preservation of the existing bridge that is currently posted for 4 tons to retain its historic elements or building a new, two-lane structure with a 40-ton weight limit.

Due to the significant response, lead agency PennDOT extended the on-line survey deadline from the original April 23rd date to June 1st. Questions and feedback may be directed to a project hotline at (610) 234-5148 or by email skinnersfallsbridge@aecom.com. Periodic updates will be provided to those who join a contact list.

The survey results and consultation with a Project Advisory Committee that has met once to date on February 22 will inform the development of a Purpose and Need Document. Once the final alternative is chosen, it’s expected to take two years to secure funding, permitting and environmental clearances before any construction would occur.

The second study for which the Commission approved $70,000 is to analyze re-decking options for future rehabilitation of the 1939 Port Jervis, NY-Matamoras, PA Bridge. Its open grid system requires frequent welding repairs. Consultants are looking into replacing it with a concrete deck. This work will continue the $30,000 approved for the study in 2020.