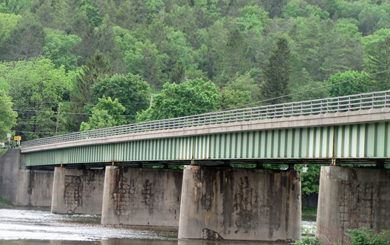 Major Rehabilitations in the Works for Several Upper Delaware Bridges

Caption:
A major rehabilitation of the 1961 Callicoon, NY-Damascus, PA Bridge, first broached in 2016, has been delayed again to allow for additional design work. The estimated $10.6 million project is now anticipated for construction in 2021.

BINGHAMTON – While no capital construction work on the Upper Delaware River’s 10 interstate bridges is scheduled this summer, the Department of Transportation is gearing up to issue contracts in 2020 for major rehabilitations of the 1953 Cochecton, NY-Damascus, PA and the 1961 Callicoon, NY-Damascus, PA Bridges to commence in 2021.

More immediately, a field meeting is set for June 13 to consider options for the 1901 Skinners Falls, NY-Milanville, PA Bridge after an April 16 inspection revealed open cracks in the NY side abutment, damaged deck boards, and two ineffective sway bracing members.

With a full rehabilitation estimate pegged at $15 million for the historic truss structure, engineers are debating whether to replace the entire single-lane timber deck system instead. While that cost wasn’t provided, it could be put out to bid in the Fall of 2019 or Spring of 2020.

The New York-Pennsylvania Joint Interstate Bridge Commission held its annual meeting in Binghamton on May 29.

Preliminary design work for rehabilitation and painting of the 1939 Port Jervis, NY-Matamoras, PA Bridge was also authorized on the schedule, but at zero dollars since the Pennsylvania Department of Transportation (PennDOT) will handle it in-house. A total of $33,128 was spent to maintain that bridge in Fiscal Year 2018.

This year’s inspection found large spalled areas with exposed and missing rebar on the substructure, bridge joint deterioration at all piers, a large spall in the upstream PA wing wall, scupper grate section loss, significant pavement deterioration with large pot holes in the deck which are retaining water, the steel paint system failing, many cracks on the wearing surface and pavement, asphalt in need of repair at the curb line, and the sidewalk rail and guiderail damaged.

Contract letting for the Callicoon-Damascus Bridge is tentatively planned for November of 2020, but first comments from agencies including the National Park Service (NPS) must be addressed and submitted to the Federal Highway Administration for review.

At a Nov. 2, 2016 public information meeting, engineers had described plans to replace the superstructure and repair the substructure in a $9.9 million job that was targeted for construction in Spring of 2018.

The rehabilitation plan for the Cochecton-Damascus Bridge was also revised based on a decision to replace the deck rather than repair it. Contract letting is aimed at September 2020, with no projected cost given at this time.

NPS Upper Delaware Scenic and Recreational River Management Assistant Carla Hahn said it appears that construction in 2021 may overlap at the Callicoon and Cochecton crossings into Damascus, which could present detour issues due to their distance proximity.

Commission members responded that they expect to allow one-way alternating traffic during the Callicoon bridge construction, and will offer an incentive to the winning contractor for Cochecton to use pre-cast deck panels to complete that job before Callicoon work begins.

Maintenance for the Skinners Falls-Milanville Bridge, which is listed on the State and National Registers of Historic Places, was $22,062 for the past year with another $26,000 authorized for 2019-20, beyond the repair contract currently under consideration.

“Skinners is one of the remaining cultural resources we have in the river valley. We would like to know, what is the long-range plan”, asked Hahn, while offering the National Park Service’s technical assistance.

PennDOT staff said their goal is to do what’s necessary with repairs to keep the bridge functional and try to prevent closure in the future.

The November 2018 accomplishments of finalizing the new $18.9 million Pond Eddy, NY-Pond Eddy, PA Bridge that replaced its 1904 predecessor after decades on the controversial drawing board and reopening of the 1953 Narrowsburg, NY-Darbytown, PA Bridge to two-way traffic after it was reduced to a controlled single lane for five years preceding a $6.7 million major rehabilitation provided two less topics to discuss at this year’s annual meeting. Also completed in the Fall of 2018 was installation of a new deck on the 1990 re-built Kellams, NY-Stalker, PA Bridge to end a 22-mile detour put into place during two phases of the $4.49 million contract for repairs and painting of the one-lane suspension bridge.

Asked by Upper Delaware Council Executive Director Laurie Ramie whether there would be any official ribbon-cutting ceremony for the Pond Eddy Bridge, PennDOT officials said they don’t historically organize such programs but could take it under advisement.