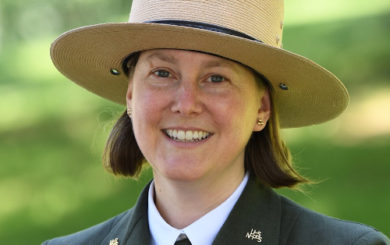 The Northeast Region has a budget of nearly $320 million and more than 3,000 employees.

“Gay’s expertise and experience leading one of the NPS’s most visible and complex parks and her familiarity with the Northeast Region makes her the right choice for the role of Regional Director,” said Reynolds “Gay’s strong stewardship of the National Mall and Memorial Parks earned her the respect and admiration of her colleagues and park supporters in D.C., and I am confident that her commitment to strong partnerships and parks will serve her and the Northeast Region well.”

Vietzke served as the Northeast Region’s deputy regional director from 2011 to 2015, leading the region’s park operations, resource stewardship and science, and external affairs and partnerships programs.

Among her many other NPS assignments, she served as the superintendent of Fort McHenry National Monument and Historic Shrine, and Hampton National Historic Site in Maryland, where she was instrumental in creating a Baltimore-based youth employment program. She managed the design and construction of the eco-friendly Fort McHenry Visitor and Education Center; a $15 million partnership-funded facility. Additionally, she served as superintendent of Sagamore Hill National Historic Site in Oyster Bay, N.Y., where she oversaw the park’s general management plan, strengthened relationships with partners and opened the newly rehabilitated Old Orchard Museum.

Vietzke will begin her assignment with the Northeast Region in early September. An announcement regarding leadership of National Mall and Memorial Parks after Veitzke’s departure will be made soon.