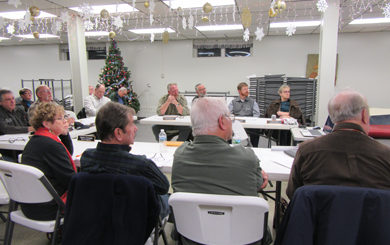 The Upper Delaware Council sent the following letter to express concerns over the three-month delay in the processing of the UDC’s Fiscal Year 2018 federal funding.

U.S. Department of the Interior

As the non-profit organization that has worked in partnership with the National Park Service (NPS) for three decades to cooperatively manage the Upper Delaware Scenic and Recreational River in New York State and the Commonwealth of Pennsylvania, the Upper Delaware Council, Inc. (UDC) is again dismayed over an undetermined postponement in receiving the federal funds on which we rely to fulfill the work plan tasks specified in our contract with NPS.

An entire financial quarter has gone by since the October 1st start of Fiscal Year 2018 with no incoming funds despite the UDC being in the midst of its executed five-year Cooperative Agreement term, having to advance monies to cover bills then apply monthly for reimbursement of expenditures, and being prohibited from carrying over any previously allocated funds.

This delay comes after we faced financial hardship anxieties earlier this year when our federal account was depleted while awaiting finalization of a Department-wide review of all Cooperative Agreements valued at $100,000+ that Secretary Zinke ordered in mid-April. The subsequent funding freeze prompted the UDC to proactively plan to lay off its three employees and shut down until access to the balance of our Fiscal Year 2017 funds was restored on July 20.

The 1986 Final River Management Plan for the Upper Delaware Scenic and Recreational River which the Secretary approved as compatible with the Wild and Scenic Rivers Act under Section 704 of Public Law 95-625 assigns as a responsibility of the Department of the Interior/National Park Service: “Provision of funding, pending the availability of funds, for adequately staffing and operating the Upper Delaware Council” (page 36). Uniquely at the time, the federal government agreed to limit its jurisdiction and partner with the states and local communities to continue their stewardship over the 55,574.5 acres of primarily private property within the Congressionally-designated boundary. The UDC provides the forum for joint decision-making, and oversees the effective implementation of the Plan’s goals and the Land and Water Use Guidelines.

The UDC’s budget is predicated on receiving a $300,000 annual appropriation through a line item in the Upper Delaware Scenic and Recreational River unit’s budget, which has not adjusted for inflation since the organization’s inception in 1988. Therefore, the Council has reduced its staffing and programs accordingly while striving to meet our core responsibilities. Attempts to seek a 40% total contribution of UDC operating aid from the two state voting members as the Plan had anticipated have been unsuccessful to date.

In an inquiry that we were advised was unrelated to the processing of our FY 2018 application, the Council was instructed by the NPS Northeast Regional Office on Oct. 30, 2017 to compile and analyze 30 years of financial records by a Dec. 1, 2017 deadline to verify the source of an independently audited Unrestricted Fund that represents our non-federal working capital and is the only source allowing the UDC to keep functioning during this lag time in federal funding.

This arbitrarily-timed probe cost the UDC over $7,800 to contract for the professional accounting services necessary to respond. The unexpected costs to assemble documentation that was routinely provided to NPS through our transparent reporting procedures have added to our burden during this time of uncertainty over when federal funding will be made available.

Having provided all information requested of us to date through the SF-424 Application for Federal Assistance process for Fiscal Year 2018, we acknowledge that the impact of three Continuing Resolutions pending passage of a federal budget creates operational issues for your agencies as well.

It would be helpful to receive formal communication about any timetables for action or possible options for partial payments to honor existing Cooperative Agreement commitments. This would assist entities like the Upper Delaware Council whose existence depends on a federal contract to develop a closure plan in case our dwindling resources are exhausted before funding is awarded.