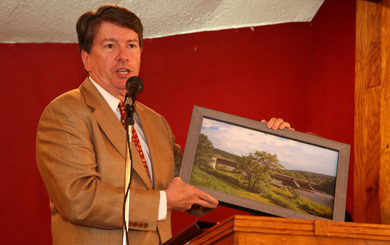 Washington D.C. – Congressman John Faso (R-Kinderhook) today announced that the Upper Delaware Council (UDC) has secured critical federal funding from the Department of the Interior in order to continue its important operations. The funding had been delayed since the new fiscal year began on October 1, 2017 as the Department of the Interior was reviewing all grant awards more than $50,000 in value.

Congressman Faso has worked with Secretary Zinke’s office and the Department during both the Fiscal Year 2017 and Fiscal Year 2018 to alleviate the funding delays.

“The Upper Delaware Council is very grateful for Congressman Faso’s advocacy and persistent inquiries to the Department of the Interior on behalf of our non-profit organization. Restoring access to the federal funding we rely on to operate means that we can avoid our planned March 30 shut-down and staff layoffs, and continue our mission in partnership with the National Park Service to cooperatively oversee administration of the Congressionally-designated Upper Delaware Scenic and Recreational River,” said Laurie Ramie, executive director of the UDC.

“This funding is absolutely critical for UDC and the important work that they do,” said Faso. “I am happy that I was able to work with the Department of Interior to help them understand the critical work UDC performs to conserve and manage the Upper Delaware Scenic and Recreational River and ensure that they receive their funding before their March 30th deadline.”

The UDC was established in 1988 to represent the interests of the local and state governments in New York and Pennsylvania, working through a Cooperative Agreement with the National Park Service, to manage the Upper Delaware Scenic and Recreational River. The designated river corridor is 73.4 miles long and encompasses 55,574.5 acres of mostly private property.