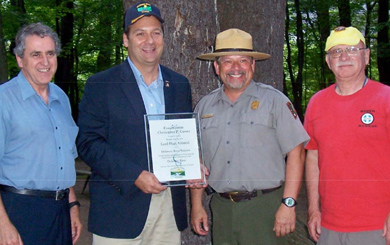 MATAMORAS, PA – U.S. Congressman Christopher P. Carney (PA-10th District) pledged to do all he can to “live up to this honor” as he was recognized on June 22 as a Lord High Admiral of the 15th Annual Delaware River Sojourn.

Each year, the Sojourn Steering Committee pays tribute to individuals and organizations that have contributed to the stewardship of the Delaware River and its natural, cultural, recreational, and scenic resources. The title harkens back to Daniel Skinner, who made history as the first man to navigate a raft of logs from his Pennsylvania home south of present-day Callicoon to downriver ship-building markets in 1767.

Fellow pioneers of the log rafting industry thereafter hailed Skinner as “Admiral of the Delaware” for his entrepreneurial ingenuity and success.

As a Lieutenant Commander in the United States Navy Reserve with an active record of military service, Congressman Carney expertly returned the salute of the Sojourners who had earlier paddled a 15-mile stretch of the Upper Delaware River from Ten Mile River to Pond Eddy, NY. Rep. Carney discussed his personal appreciation for the Delaware River and those who work to conserve, enhance, and promote the nationally-recognized waterway. “It takes everybody’s efforts to make sure we protect what we have here,” he said. Carney, elected to represent Pennsylvania’s 10th District in 2006, noted that his role will be to assure that Congress sets good policy to maintain the Delaware River’s pristine water quality, the economic opportunities it generates for river valley communities, and its status as the longest undammed river east of the Mississippi.

The Dimock, PA resident, fly-fisherman, and father of five also lauded the relevance of the Sojourn’s 2009 theme: “No One Left Inside”, which encourages children in particular and people of all ages to experience the great outdoors.

Rep. Carney received his award from Vidal Martinez, superintendent of the National Park Service Upper Delaware Scenic and Recreational River, at the Sojourn’s Day 2 dinner program held at Kittatinny Canoes’ River Beach Campsites outside Milford. He enjoyed the chicken barbecue catered by the Matamoras Volunteer Fire Department before heading back to Washington, D.C. At the Sojourn kick-off luncheon on June 21, Martinez was surprised to find himself on the receiving end of a Lord High Admiral certificate, hat, and official salute as presented by the Upper Delaware section coordinators of the event.

Martinez has served as superintendent of the park unit since Feb. 4, 2008, building on a 33-year career of federal government service. The Bronx native is a second-generation National Park Service employee who worked his way up from a seasonal laborer and through positions in maintenance, interpretation, law enforcement, and administration up and down the East Coast.

He was recognized for steadily navigating the Upper Delaware Scenic and Recreational River through a challenging time of major developments with potential resource threats.

Martinez enjoyed the honor with his family, wife Zoraida and children Vidal William and Lily Aurora, as they joined him for Sojourn Day 1’s 12-mile rafting trip from Matamoras to Dingmans Access. Original river sections were changed to accommodate high-water levels. The week-long Delaware River Sojourn, organized by a partnership of non-profit organizations, government agencies, and interested citizens from New York, Pennsylvania, and New Jersey, continues through June 27. Co-chairing the 2009 Steering Committee are Kate O’Hara from the Delaware River Basin Commission and Richard Rhodes from the National Canoe Safety Patrol.