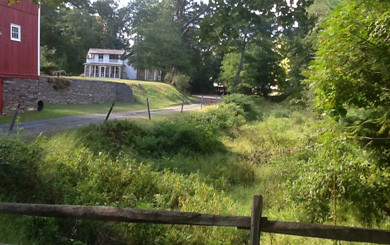 Photo by Debra Conway, UDC
CANAL CLEAN-UP: A crew from Leadership Sullivan on May 21 will tackle cleaning up the overgrown vegetation in the historic Delaware & Hudson Canal bed at the National Park Service’s Corwin Farm Ranger Station in the Town of Lumberland.

HILLSIDE – The Leadership Sullivan Class of 2016 will deploy its volunteer crew on May 21 to help restore an overgrown section of the Delaware & Hudson Canal.

The UDC submitted an application to help advance natural resource protection and historic preservation of an intact local portion of the D&H Canal which operated from 1828 to 1898.

The work site will be the Corwin Farm Ranger Station located along New York State Route 97 in the Town of Lumberland between Barryville and Pond Eddy.
The National Park Service has owned the 4.24-acre site on the banks of the Upper Delaware Scenic and Recreational River since 1994.

The property includes remnants of D&H Canal Lock 67, along with a lock tender’s house, barn, and outbuildings set within a landscape of mature trees, orchards, and lawns.

The de-watered canal’s stone retaining walls, earthen/gravel towpath, and causeway continue to convey its 19th century design and use, but an overgrowth of woody material, shrubs, and plants threatens to distress its features.

Non-historic vegetation, much of which is also non-native, now fills the canal bed and has begun to cover and damage some of the stone walls, while several large trees grow between the canal and the towpath in that area that would have been kept clear during the canal’s operating era.

In addition to immediately assisting with protection of the resource, removing this vegetation will allow for a more accurate interpretation of the site’s history.

National Park Service (NPS) employees will provide an orientation program to the Leadership Sullivan volunteers, who will work under the supervision of the Upper Delaware Scenic and Recreational River unit’s Maintenance Division with the goal of clearing approximately 120 yards of the canal bed during the May 21 work day.

The Upper Delaware Council proposed this project as an opportunity for Leadership Sullivan – a business-supported program sponsored by the Sullivan County Chamber of Commerce Foundation – to learn more about the scenic, recreational, ecological, cultural, and geological assets of the Upper Delaware River Valley that are a significant quality of life issue and tourism draw in western Sullivan County.

It also highlights the National Park Service Centennial Anniversary in 2016, which the UDC’s federal partners at the Upper Delaware Scenic and Recreational River are celebrating with a series of events through this fall. Visit www.nps.gov/upde to see a schedule of the special events, program, and paddles.

The UDC’s mission is to coordinate administration of the 1986 River Management Plan for the Upper Delaware Scenic and Recreational River. Its voting members are the State of New York, Commonwealth of Pennsylvania, and 13 local governments that border on the river, with the Delaware River Basin Commission as a non-voting member and the National Park Service as its Cooperative Agreement partner.