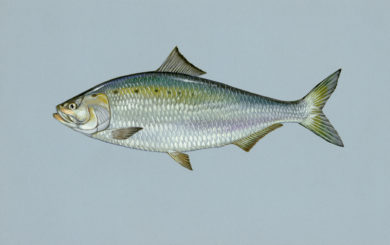 Upper Delaware Scenic and Recreational River to celebrate American shad, World Fish Migration Day, and the 50th Anniversary of the Wild and Scenic Rivers Act on May 19th

An ancient and impressive wildlife migration is occurring in our midst. The spring spawning run of American shad is a timeless ritual, one that has taken place in the Delaware River for the past 10,000 years. On Saturday May 19th, the National Park Service will celebrate this rite of spring with a shad viewing float trip on the Delaware River from the Callicoon River Access (PA) to the Skinners Falls River Access (NY) between 10:00am and 2:00pm. Join park biologists for a 9-mile river paddle to observe migrating American shad, learn about their natural history and ecology, and simply enjoy the outdoors.

Determined fish are now travelling 330 miles or more upriver from the ocean, on this last major river on the Atlantic Coast that is undammed the entire length of its main stem. Some of these 3 to 6 year-old fish have travelled over 12,000-miles at sea, including annual forays to the Gulf of Maine and the Bay of Fundy. Historically, the Delaware River had the largest American shad runs of any river on the Atlantic Coast and migrating fish likely numbered in the tens of millions. While much reduced in numbers today, American shad runs on the Delaware are still significant, remain an important food source for numerous species of wildlife (including bald eagles), provide beneficial biomass, energy, and nutrient inputs into the system, and underscore the importance of our ocean connection.

As a unit of the National Wild and Scenic Rivers System since 1978, the Upper Delaware Scenic and Recreational River realizes some important protections afforded under the Wild and Scenic Rivers Act. These include a prohibition on river obstructions such as dams, helping to ensure that sea-run migratory fish species such as American shad and American eel continue to have unimpeded access to historic spawning and rearing habitats throughout the river – access that is now missing from so many of the nation’s other rivers.

The float trip is open to the public, but for a limited number of people with their own boats (canoes or kayaks) and transportation. Reservations must be made ahead of time by contacting Don Hamilton, Chief of Natural Resources, at don_hamilton@nps.gov (preferred), or (570) 729-7842 ext. 3302.